MasterWriter 2.0 for Creative Writers, is the most powerful suite of writing tools ever assembled in one program. This unique and revolutionary software opens up a new world of possibilities for descriptive words and ideas. There is always a better way to say something and MasterWriter will show you all the possibilities in an instant. In a profession where every word counts let MasterWriter take your writing to a new level.

The only screenwriting software to win an Academy Award. Innovators of Award-Winning Writing Software since 1982

Gorilla is the only software package built with the independent producer in mind. 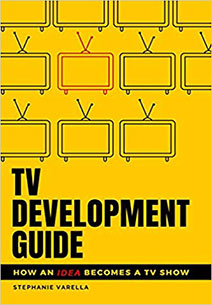 The "TV Development Guide: How an Idea Becomes a TV Show" is perfect for anyone thinking about getting into the TV business, just starting out or already in it and looking for some insight and guidance for their projects. It's a clear, concise, entertaining book about how the TV biz works, a step-by step guide how TV development works which includes script development, having a career in TV, how to develop your idea, pitching, strategies on selling your show and more. It pulls back the curtain on an industry that is so hard to get a grasp on and was the FIRST book on the market to explain the process of how an idea becomes a TV show.

Find out more and order here. 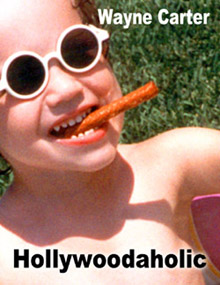 Hollywoodaholic - Confessions of a Screenwriter by A. Wayne Carter

Everyone who has ever thought about writing or working in Hollywood will want to read this book. These are the personal and often outrageous adventures of a veteran screenwriter who has worked extensively for the major studios, as well as with major directors such as Richard Donner and James Cameron.

There are abundant writing lessons to be learned here, but "life" lessons, as well. In fact, this story is about "getting over" Hollywood, more than just "getting into" Hollywood. Readers looking past the material or superficial (e.g., celebrity) for something more meaningful in their lives, will find this book truly uplifting. 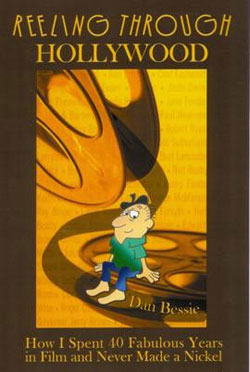 REELING THROUGH HOLLYWOOD:
How I Spent 40 Fabulous Years in Film and Never Made a Nickel

"Dan Bessie's book should be obligatory for anyone considering a creative life. . . The story is rich in detail, funny, and honest. Bessie . . . reviews a rich and sometimes desperate life as a creative person who sustained himself by wit and wile. I hope that I'll be able to say as much about my own."
Peter Coyote, EMMY winning actor: ERIN BROCKOVICH, ET, etc.
"If you've ever wondered what Jane Fonda, Spiderman, Clint Eastwood, Bertholt Brecht, Tom and Jerry and Ken and Barbie and Roy and Dale plus. . . the Culligan Man and the House UnAmerican Activities Committee have in common, the answer is Dan Bessie. He encounters them all in his lively account of his struggles to make films his way. 'Reeling Through Hollywood' is both a delight and a powerful tutorial in independent filmmaking."
Tom Rickman, OSCAR and EMMY nominated screenwriter / Humanatis Prize winner: COAL MINER'S DAUGHTER, TRUMAN, TUESDAYS WITH MORRIE, etc.
ORDER Reeling Through Hollywood at: bluelupinpress.com
$22.95 / Students, $18.50 (please add $2.50 S & H) 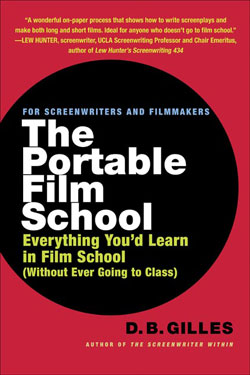 For anyone who can't get into film school. An on-paper process that shows how to write screenplays and make both long and short films. Will save you years of head scratching and will completely demystify the process of making a movie.

D.B. Gilles is the author of "The Screenwriter Within" and "The Portable Film School." He is a produced and published screenwriter, TV writer and playwright. He did the screen adaptation of the play "Spinning Into Butter" starring Sarah Jessica Parker due this Fall. He teaches Screenwriting and Comedy Writing in the Undergraduate Film & Television Department at New York University's Tisch School of the Arts. He is also a Script Consultant and Writing Coach. 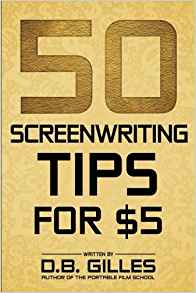 50 Screenwriting Tips for $5 by DB Gilles

50 Screenwriting Tips For $5 is a like a cool screenwriting class to go. In less than 100 fast-paced pages, Script Consultant, Writing Coach and New York University Film School Professor D.B. Gilles offers up his take on writing a screenplay with 50 easy-to-read screenwriting tips. They will help beginning screenwriters complete their scripts and get them closer to the goal line. 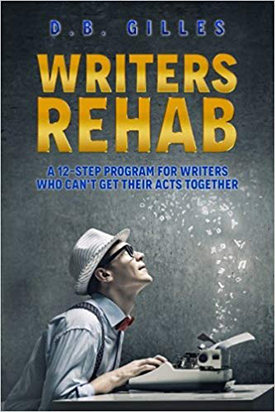 Writers Rehab: A 12-Step Program for Writers Who Can't Get Their Acts Together by DB Gilles

There's an eerie correspondence among the 12 stages of the Hero's Journey, the 12 steps of AA recovery and the sometimes challenging experience of becoming a professional writer. Filled with tough love and unvarnished truths about the business of writing, Writers Rehab takes both experienced and aspiring writers past self-delusion and towards productivity.

If you've ever found yourself staring at the blank page all day, or cleaning out the refrigerator for the fifth time in a week just to avoid seeing that taunting blinking cursor, then you've experienced writer's block. The good news? It means you're a writer. It's not important that you have these times; what's important is how you deal with them. Outwitting Writer's Block will provide tricks of the trade to help any writer break through the dreaded block and become a more creative and better writer than before. A humorous, inspirational, practical guide for writers, college students, businesspeople, and those who would like to write as a means of therapy or "release."
Only $14.95! Order here. 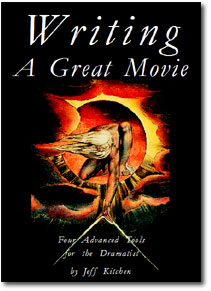 Writing a Great Movie: Four Advanced Tools for the Dramatist by Jeff Kitchen

Hollywood creative executives consistently say that Jeff Kitchen teaches "the most advanced development tools in the film industry." What makes this book entirely unique is that once Jeff explains the tools in detail, he then builds an original screenplay from scratch to demonstrate them. You work alongside Jeff as he starts with a one-sentence idea and wrestles it into a fully structured plot using the tools. This is a real script that he's actually writing and the process is left unvarnished and transparent, with all the struggles, the brainstorming, the dead ends and the breakthroughs that constitute the daily grunt work of constructing a screenplay. The book costs $29.95, plus $4.00 for shipping. Order here. 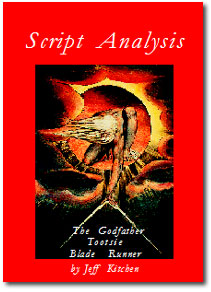 Script Analysis: The Godfather, Tootsie and Blade Runner is the companion piece to Writing a Great Movie. It features state-of-the-art dramaturgic analyses of these great films, utilizing Jeff's four tools. The book is designed to consolidate your knowledge of the tools by taking you deeper into their full use. While script analysis is extremely useful in diagnosing and curing elusive story problems, this book is primarily intended to help you make your own screenplays work. It's about writing screenplays, not studying them. The book is $19.95, plus $4.00 for shipping (unless you buy Writing a Great Movie and then $4.00 covers shipping for both books.) For those who have already taken my classes, these script analyses have been completely revised and updated from their 1993 edition and they can be bought for $10.00 by former students. Order here.

Doing It For Money - The Agony and Ecstasy of Writing and Surviving in Hollywood Edited by Daryl G. Nickens

Forty-eight top film and TV writers tell the real story about making it in the entertainment business... and it isn't always pretty. Doing It For Money - The Agony and Ecstasy of Writing and Surviving in Hollywood (Tallfellow Press, ISBN 1-931290-58-X, $24.95, 288p, Hardcover, May) offers personal essays and behind-the-scenes tips that will either scare you away forever or confirm that you were meant to be a writer.
Contributors include Stephen Gaghan (Syriana, Traffic), Terry Rossio (Pirates of the Caribbean, Shrek), Leslie Dixon (The Thomas Crown Affair, Mrs. Doubtfire), John Sacret Young (The West Wing, China Beach) and many more. For a complete list of contributors, their credits and notable quotes from the book, visit www.Tallfellow.com 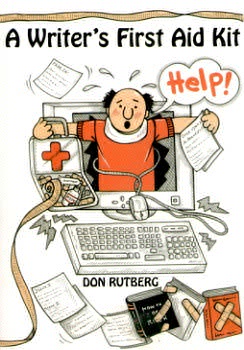 No matter what you write, or plan to write - screenplays, TV scripts, children's book, novels, nonfiction books, magazine articles, comic books - this book will show you how to get started, how to get ahead and what to expect from the marketplace.
When you're an outsider, it's not a matter of who you know - because you don't know anybody - it's what you know.
Learn how to get noticed by agents, producers and publishers.
Learn how to adapt your work into different formats, including TV/Film treatments.
Learn about contracts, copywriting; what to do once you've finished your script/book/article.
Acquire show-biz savvy without moving your family or selling your soul - well, at least without moving your family. Order Here.

This book is about details and the intricate, complex elements that make it possible for films like The Hours to become great films. It's about creating a script that moves well, with a focused, original story that leaps off the page and gives a great actor something to work with. It's also about creating stories that touch and intrigue an audience and perhaps transform their lives in the process. "Once again, Linda Seger has peeled back the veils and revealed the essential truths of great screenwriting, making the complex comprehensible. This book is loaded with tons of useful analysis and screenwriting craft that is essential for any screenwriter; beginner or advanced." Jack Epps, screenwriter, Top Gun, Dick Tracy $15.00. Order Here. 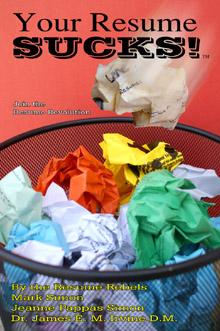 Your Resume Sucks is a how-to book written in a story format that’s enjoyable to read so you’ll actually finish the book unlike most other snoozerville resume books. It outlines our common sense Three Keys of Success and explains why the keys work with real-world examples. Plus it has many before and after examples of resumes that we revised according to our three keys and made them ROCK!

Do fancy fonts get you the fancy job? No. Find out why not on page 60.

What’s the most important item at the top of your resume? Hint: It’s not your name. Find out what it is on page 10.

In what order should your work experience be listed? The shocking answer is on page 23. 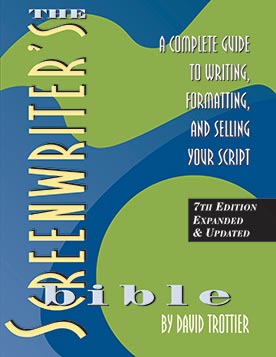 The Screenwriter's Bible: A Complete Guide to Writing, Formatting, and Selling Your Script (Seventh Edition) by David Trottier.

For more information or to order your copy, visit the book's page 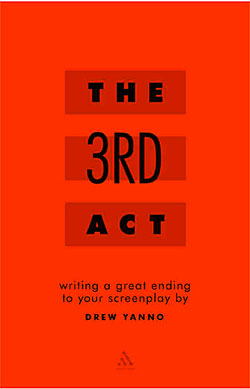 The Third Act by Drew Yanno

A film's ending is crucial. It is the last thing an audience sees and often the last thing it remembers upon leaving the theater. Indeed, it's no stretch to suggest that, more than any other part of the film, the ending determines whether the audience likes a film or not.
The Third Act is the first screenwriting instructional book to focus entirely on that most important part of a script - the ending.
The book features detailed examinations of the endings of many memorable films, including Rocky, Rain Man, Good Will Hunting, Saving Private Ryan, Casablanca, Million Dollar Baby, Se7en, Lost in Translation, and Gladiator. Through this analysis, Drew Yanno highlights the structural elements you'll need to make your screenplay's ending as compelling and satisfying as
possible.
If you want to understand the fine art of writing a great ending to your screenplay, The Third Act is a truly useful resource and inspiration.
Order here.