Last time, we looked at fixed mindsets and introduced ourselves to the question: Why do talented writers fail? Or perhaps more appropriately…how can writers fail despite possessing talent?

Many of you wrote to me and shared your experiences writing scripts and how you’re either in a fixed mindset now, or you’ve tackled it over the years. I read several replies to the effect of “you wrote about me.”

One writer shared: “While taking some time to think about the questions raised in the article, I realized I have depended too heavily on my ability to be creative and have not nurtured many opportunities for learning from others.”

Another wrote and said, “Now, with every screenplay I write, my goal is to simply get better. “

I appreciate those of you who shared your personal growth stories and struggles.

Since many of us share struggles but also have widely varying experiences and personalities, it makes sense that the writer’s journey is often impeded om various roadblocks.

What are these roadblocks? What if you have a growth mindset but still face challenges? In Robert. J. Sternberg’s book In Search of the Human Mind (1994), he mentions 20 reasons why “intelligent people fail” (yes, it’s where I pulled the title of this article series from).

Lack of perseverance and perseveration.

We all know what it means to persevere but how about to perseverate? Perseveration is defined by Merriam-Webster as a continuation of something (as repetition of a word) usually to an exceptional degree or beyond a desired point.

While continuing (or persevering) through hardships to an exceptional degree is desirable, it is persisting “beyond a desired point” that is similar to the popular “definition of insanity.” How do you find a balance between not giving up on a project or down a path too early while knowing when to move on?

One practical example is when you encounter difficulties on a particular draft or in selling it. Persistence is key, but part of allocating your resources means you discover more efficient strategies. If you’re stuck writing a script and find yourself unproductively spinning your wheels, switch to another script. It’s fairly common for many writers to work on more than one script at a time. One way you can do this is by working on a project in one phase of completion (let’s say the 2nd draft) while you’re fleshing out the outline for another. That way, you can later return to the other script with a fresh perspective and more creative energy, going back and forth as you need it. 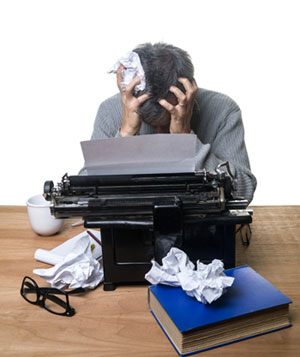 Why jump from project to project without ever finishing any? Is it dissatisfaction in your work? If so, this might be a matter of adjusting your expectations/standards from impossible to reasonable.

Perhaps you have uncertainty about the next step after completing your script, such as subconscious fears of what people will think about your writing?

Or, you’ve noticed a pattern of boredom, where every project sounds exciting but you quickly lose interest.

Each of these fears, habits and attitudes all have one thing in common: they will not lead to success. Perhaps self-reflection and talking with writing peers will offer some sort of “therapy” that can help us maneuver around this particular block. Setting up a rewards or punishment system based on deadlines can also help create better habits, but similar to weight loss or fitness goals, it’s best when you have some accountability in the form of a peer who has control over the reward/punishment system. Why not, for example, have your friend hold tickets to a show that you bought, but that he/she will enjoy for themselves if you don’t complete your writing goals?

On the other hand, completing even page 1 can intimidate many writers.

You have brilliant ideas but can never act on them. One way to get over this roadblock is to first make sure your thoughts are organized: write them down. Create an email address for yourself, or a folder within your usual email address, just for your ideas.

Have a clear sense if your idea is justified as feature length – or perhaps it’s just a scene within this framework – or if it’s better suited as a short (writing your logline before you start your script would be a good idea in this case). Then make a rough outline. Don’t spend needless amounts of energy getting the outline perfect. Tell your ideas out loud to friends and ask them if they want to know what happens next.

Creating an organized system even if it doesn’t produce great results (and one can argue, most of our ideas won’t be great) as it’s better than “talking without doing.”

If you’re paralyzed by fears before you start, you might be overthinking it. Just relax, treat your writing like it’s your job. If you stop working, you’ll lose income. If you tell yourself you’re a writer, then that’s what you do. Don’t over-romanticize it. As NIKE says, “just do it.” So start. Unless you have the fortune of being the most in-demand writer in town, no one is expecting the world from you at this point. Use that to your advantage and just write because you need to express your ideas.

Is it writer’s block or laziness? What is preventing us from taking action?

Though there is some overlap with failure to initiate above, this is for those of us who do end up initiating action but wait until the very last minute to do it, taking ages to finally get to work.

Guilt plays a big part in many writers’ psyche. Guilt over not doing more, of not writing more. Part of working through this guilt is just being honest with yourself.

If you know you need a rhythm (jumpstart your creative half) to get started, then own it. Admit you need to play a few games of Trivia Crack or watch some silly YouTube videos with a wine of glass to prime the pump, but make sure you set a timer. Once your 20 minutes are up, get started and start writing. Turn off your wi-fi. Uninstall your Facebook app from your phone.

Living in Los Angeles, a city where everyone is writing a script (or in post-prod on some kind of project), I often do the whole Starbucks writing routine (or frequent other more charming coffee shops), surrounded by other writers. When I walk down the rows of tables, I can’t help but notice Facebook is open up far more often on their screens (and mine) than Final Draft or Final Cut. If I go with a buddy, they’ll ask to take a smoke break with me despite the fact that we both just got there.

Procrastination is a killer. So admit that you work best if you unwind for a bit. Do make sure you write down both your immediate goals (get through this scene, write a short film you’ll shoot this summer) and your long-term goals. Try “swallowing the frog” and finish the tough goal first. Or, complete some smaller goals to work up your confidence. But make sure you don’t leave that writing session without something getting done.

I asked writer/producer Brian Young what he thought about procrastination. "Procrastination is the writer's brain saying you aren't ready," he says. "So it's not a bad thing - unless it's mowing the lawn or walking the mutt. Embrace it, let it happen, and the story will be that much better when it does come out."

Next time we’ll look at a few more roadblocks to our writing goals.

Until then, may you rest not in your talent but in your progress – in your attitude, not your aptitude.

Write me! I’d love to hear your thoughts on these roadblocks, or even on last week’s discussion on fixed vs. growth mindsets:

Michael Kim has worked in every department at InkTip. He is now the VP of Product Development & Media. Besides challenging his former "lazy pianist" fixed mindset, he enjoys foreign cinema, the NBA playoffs, and helping young writers and directors get through roadblocks. His favorite all-time film is La Dolce Vita.