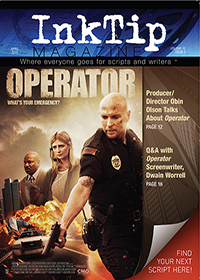 Operator is the second produced script for screenwriter Dwain Worrell, whose first film came to fruition when he was living in China and connected with Chinese producers to create Walking the Dead. After securing representation at CAA and management with Madhouse Entertainment through Amazon Studios, Dwain continued to self-promote his writing, understanding the importance of taking an active role in his screenwriting career. He had known of InkTip for years and was ready to see what our services had to offer. After a couple years of marketing Operator on InkTip, he finally found the perfect match when he submitted a query through our newsletter to Obin Olson. Two years later, Operator is produced with domestic and international distribution secured. InkTip had the pleasure of talking with Dwain about the film and his tips for up-and-coming writers.

InkTip: Can you tell our readers what Operator is about?

Dwain: The basic concept I wanted to explore is a world without rules. People often complain about the police, and granted sometimes they’re right, but I wondered about what if they were no police? Operator is about what if a 911 operator was taken hostage and the line between the police and the innocent was cut.

InkTip: How did you come up with the story for Operator?

Dwain: I came up with the concept for Operator while I was in China. I have a friend named Pamela who is a 911 operator and her husband Jeremiah is the best damn firefighter in Atlanta.

InkTip: Were you excited by the cast in the film?

InkTip: Do you find it easy or more difficult to sell a script today than five years ago?

Dwain: I feel it easier today to sell a TV spec than it was five years ago. As far as features, I’d say the volume of the sales is about the same but the avenues to make that sale are more varied. Before the average writer had zero access, now there are a few more options, InkTip included.

Dwain: InkTip gave me the access that I needed to directors that I believe are passionate and not the guys trying to make a buck.

InkTip: What writing practices do you have when writing a script?

Dwain: I’m pretty easy when it comes to writing. I don’t do outlines. I do though scribble notes and must have the beginning, middle, and end figured out before I begin writing … I’m really just a guy who works off of feeling. If I can read it through and not feel bored then it’s good. Because if I’m feeling bored reading my own work, then next guy will be even more so.

Dwain: I’m working on a project at Warner Brothers, working with Amazon on the script I wrote, and prepping for a TV project.

Dwain: Write. Simple but true. You have to write. Don’t spend too much time one script (too much time meaning a couple years). You’re going to need more than one when you make it and it only takes one script to change your life.

Chris Cookson has been with InkTip for over a decade heading up the writers department after managing the producers department.  She has interviewed numerous producers, directors, and screenwriters for the InkTip magazine.  You can read more of her work on her blog Novel2Screen where she reviews adaptations to the silver and small screen as well as interviews with writers, actors, and more.