Spice Up Your Supporting Characters

You thought of an interesting premise and made sure your protagonist completed the hero’s journey.

But your script still reads dry. It tends to drag. On top of that, you might have ideas for who can play the lead role, but you haven’t been able to think of whom else to cast for the other roles.

One thing you’ve neglected: your supporting characters. They’re weak. Underdeveloped. And because of that, not only is your story lessened, but no one wants to sign on. You imagined a veteran actor would want to play a cameo role as the cliché-ridden cranky old man. Or a legendary actress would be desperate to play the stock housewife.

Given that you’ve only focused on your main protagonist character, the main course, you’re left wondering what to do to make your whole meal shine.

To continue the analogy, you want your script to be a complete, complex meal designed by you, the chef. In that case, we should reinforce why strong, flavor-bursting supporting characters are crucial:

1) They attract talent. When a producer is trying to attach actors to projects, they have to cast based on a film’s budget and shooting schedule. Thus, in order to have as many distributors interested as possible, they’ll find better name talent. Generally, the more recognizable the actors, the better. But this only occurs if the producers can afford to pay them their rate. This means that actors may be willing to sign on for a supporting role, perhaps even a small “cameo” appearance. Why would an actor be willing to sign on to any project? Besides “taking the money,” or doing a favor for a friend, it’s the script. They want to play roles that will help maintain or increase their relevancy to the public, or, that will flex their creative muscles and provide a fun challenge. This is where you, as a writer, have a responsibility to your script to write fun, complex supporting characters. The more interesting the roles, the higher likelihood you’ll have of sparking interest in those actors.

2) They elevate the story from good to great. When your hero is constantly fighting the big battle yet doesn’t have other characters from which to bounce conflict, you’re left with a predictable plot. Your script needs mini-battles. The B-plot. Multiple conflicts. These are how the hero’s eventual “all is lost” moment is earned.

Think of dynamic supporting characters in recent film history. These are just some performances, for example, that have earned supporting actor/actress Oscars in the last 15 years: J.K. Simmons in Whiplash, Jared Leto in Dallas Buyers Club, Christian Bale in The Fighter, Robin Williams in Good Will Hunting, Lupita Nyong’o in 12 Years a Slave, Jennifer Hudson in Dreamgirls, Tilda Swinton in Michael Clayton…would these films have been as effective if the roles these talented actors played were lessened? This is not to forget characters such as Han Solo who have become iconic and beloved more than the main hero of their stories.

While the below can be applied to the central protagonist (some of the examples I give may be the central protagonist rather than the supporting characters), writing fascinating supporting characters are especially important because they are undervalued by writers who only focus on the hero’s journey. These are ways intended to be done without restructuring your entire plot.

So here’s how to add to your script’s recipe the extra flavor it needs.

Four Ways to Spice Up Your Supporting Characters

1) Give them a sense of danger and unpredictability.

Acting is pretending. Dress-up. When you play a role, you are, by nature, inhabiting someone else. But it’s also human nature to be most excited by danger. After all, when you’re dangerous, people pay attention.

Writing unpredictable characters doesn’t necessitate Nic Cage-levels of wild and crazy. The character of Anton Chigurh in No Country for Old Men was certainly dangerous and unpredictable, but also possessed a fascinating, scary calmness in his demeanor. Sure, his creepy haircut helped (we’ll get to physical appearances later), but his behavior is what ultimately riveted us as audiences. We didn’t know what Anton would do next. That level of unpredictability in a character is what allows for actor’s choices. And actors love the freedom to make highly creative choices. 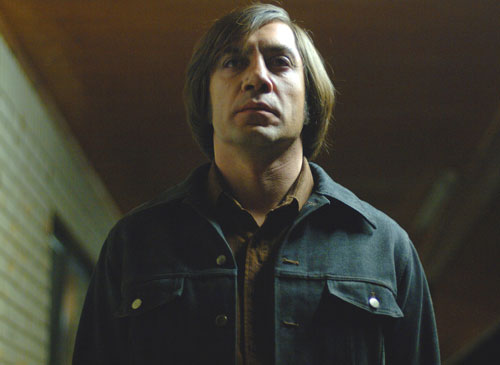 On the flipside, predictability can melt the charisma off an actor like the Nevada sun will do to a popsicle. Your dangerous and unpredictable supporting characters should be the type to suddenly bust out a new song while the choir’s still singing the same tune. You’ll get a lot of “bang for the buck” out of the limited page-counts for your characters this way. Their potential charisma points will go through the roof and actors will see that on the page.

The first thing we think of when we say scene-stealing is great performances. If you’re lucky to get name actors that bring their A-game then kudos. But as we mentioned earlier, landing that type of actor in the first place means attracting them with an exciting opportunity they may not be used to playing. In other words, don't rely on the actor to make the character shine. The character should be compelling enough that they want to play it in the first place. William Hurt won the supporting actor Oscar for 2005’s A History of Violence despite being onscreen for only eight minutes -- a prime example of what I mean by "bang for the buck."

So many scripts I’ve read seem to only focus on the main protagonist. Writers spend hours creating a backstory for the hero, especially if he/she is a subconscious reflection of their own desires or fears (living vicariously through the hero). But supporting characters provide the conflict, the flavor, and sometimes the whole reason the hero is interesting in the first place. That begins by breathing complexity into them.

One way to add complexity is with a simple game: the duality game. It’s easy to play. All you do is have your characters display traits or actions contrary to what we’d assume based on their jobs, surroundings, or physical appearances. Examples include hookers with a heart of gold, short people who are mean-tempered and intimidating (Napoleonic complex), assassins or other tough guys who take care of people or have a soft spot deep down. Try it out! Did you write a gangster? Make him also care about family and poetry.

Yes, these contradictions often become clichés and tropes. To which point, I wonder if we’ll one day view an assassin who doesn’t have a tender heart as unique. For example, who knows how many films have been made about killers with “no-kill” rules (no women or children) or tough guys who are forced to protect innocent surrogate children because seeing tough guys help the weaker provides humor, sympathy and feels (“I now know why you cry!”). Do contradictory situations and characteristics guarantee an incredible amount of complexity? No, but they're a start. Can they become contrived and again, tropes? Yes. But aren’t two-note characters more intriguing than one-note ones? I think we can all agree on that. We’ve had enough food shows over the years to know that when a critic says, “Hmm, it tastes sweet but salty. The complexity of the flavors really work!” is a good thing. 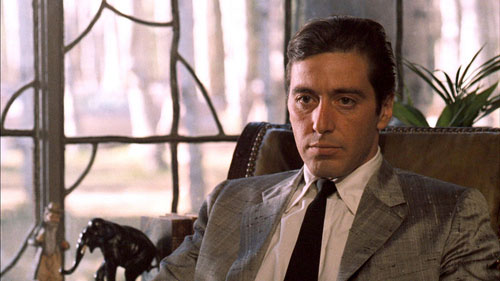 Though not a supporting character in the series, Michael Corleone is one of the most complex characters in film history.

Your supporting characters may not look like the coolest in the room (often it’s the lead actor’s job to sell “sexy”), but are potentially the most fascinating because they're often not required to be cool. The flavor in these roles might have enough complexity that an established actor is willing to sign on…even if it’s a small piece of meat.


3) Make them say the darndest things.

This is where your dialogue can really shine. In buddy comedies, the humor often plays off of a straight character (the central hero) vs a wild character (the comic relief). Superbad’s Fogell “McLovin” almost became more popular than the movie itself. Melissa McCarthy had some of the best lines in Bridesmaids. And who knew that from Matthew McConaughey’s small role in the ensemble dramedy Dazed and Confused would emerge one the most quoted lines of his career? (“That's what I love about these high school girls, man. I get older, they stay the same age.”)

On the bad guy side, your supporting character may not necessarily be your main villain, such as Hannibal Lecter in The Silence of the Lambs. Yet he or she may still serve the tastiest lines (pardon the pun). 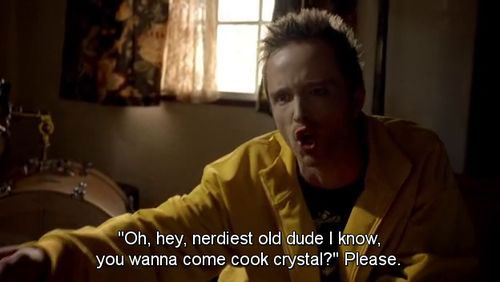 Jesse Pinkman. Mouth of the south(west).

If you want to express some wacked out lines but your hero isn’t that type of character, give them to your supporting characters. They might end up stealing the show.

At the least, you can always come up with distinctive physical traits. Exploitation movies are especially great at, well, exploiting these in a gimmicky manner. Quentin Tarantino and his friend Robert Rodriguez have written characters over the years with prominent facial scars, unique haircuts (again, haircuts), eyepatches, and guns that replaced their body parts. These examples may seem extreme, but they can not only help an audience remember a character but may help you express how those physical characteristics reflect their inner characteristics. After all, Richard III was not really a hunchback, but Shakespeare exaggerated his scoliosis for dramatic effect. In Se7en, Brad Pitt asked, “What’s in the booooxxx?” The answer is, “Your characters are.” So think outside it. Remember that ordinary or perfect can be boring.

Because film is visual, it’s a good idea to play with different appearances. Make your character turn heads. If done well, he or she will be remembered. 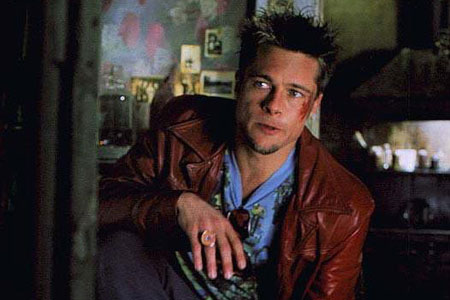 Tyler Durden, a very spicy character, meets all 4 above.

Keep in mind that these doesn’t guarantee amazing results. Execution always matters. Also, there are much more complex ways to make your supporting characters shine that are based on the story structure. But that’s another subject and requires deeper analysis. As mentioned earlier, these are four hacks that may add some value without requiring you to restructure your whole script.

In conclusion, here’s how you can spice up your supporting characters dish:

Add a spoonful of unpredictable and dangerous sauce, layer on some complexity, stir in some of your most daring dialogue and make it interesting on the plate with a face to remember.

If you can do that, your script will smell so good a mile away that you’ll have actors dying for a taste.

Michael Kim has worked in every department at InkTip. He is now the VP of Product Development & Media. Some of his favorite supporting characters in recent years include Shuri from Black Panther and Lady Sarah from The Favourite. He believes Roma was robbed.