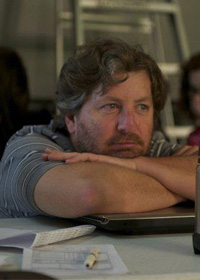 Steve Peterson has seen no shortage of success through connections he’s made from InkTip. His first writer for hire job through InkTip turned into the produced film Cop Dog directed by John Murlowski, which graced the cover of the InkTip magazine in 2006.

Murlowski enjoyed working with Steve so much he referred him to producer Douglas Shaffer with Jorva Productions. That referral transformed into more hires and more produced credits for Steve. He is back with his third InkTip cover for The Hunt for the Labyrinth Killer, another script he penned for Douglas Shaffer with producer Johnson Chan. Although he’s busy typing away at his latest script, he had a moment to chat with InkTip about his writing and finding the time to balance it with marketing his screenplays.

InkTip: The Hunt for the Labyrinth Killer was another work for hire, correct?

Steve: Yes. Jorva [Productions]wanted to try their hands at a twisty legal thriller like the kinds that used to be on the big screen, so we developed the project together – with plenty of advice from Vince Reppert, who's a lawyer in addition to a Jorva Executive!

InkTip: How do you choose which ideas of yours to pursue when you aren’t writing for hire?

Steve: Nowadays one of the key features I need to write a spec is to have an ending already in mind that feels good. Earlier in my career I'd start writing screenplays because I had a bunch of cool ideas for act one and a little ways onward, but then I'd get to the end and start to flounder. That's particularly painful, because I'd still love the beginnings, but I'd never be able to figure out how to turn it into a complete movie.

Steve: I'll typically write through it. But when there's a scene or sequence that I need to think through I'll go for a hike or go swimming, find some physical activity that doesn't require too much concentration, and let my mind wander. Typically, this gives me the time to come up with what I need to do next.

InkTip: What is your system for keeping on track with your writing and marketing?

Steve: It's mainly just about keeping busy. I try to have at least two or three screenplay ideas that I'm developing so that when I finish a project I can move fairly quickly into the next one. This also helps prevent me from getting too hung up on one script. 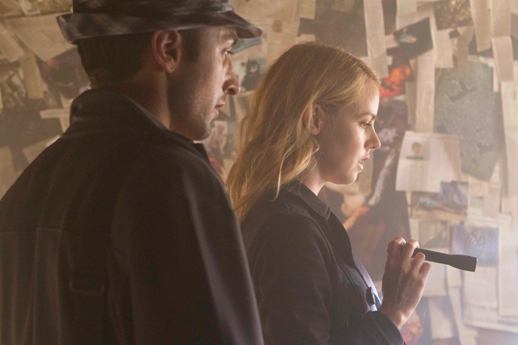 Scene from The Hunt for the Labyrinth Killer

Steve: After I've run it by a few friends to get feedback I'll do revisions, give myself some time to think about it a bit more, then start slowly going out to a smaller set of places where I'm trying to shop it in order to see what kind of response I'm getting.

InkTip: How do you know when to finish a script or when to throw the towel in and realize it simply isn’t working?

Steve: Unfortunately, I don't think I really know how I feel about any particular script until about one year after I finish it. At first I'm usually pretty excited about anything I've completed. But only after some time has passed and I look back at the various things I've written do I know which ones I still really like, which ones I think could be salvaged, and which ones should just be left alone.

InkTip: How do you keep the momentum going when you are writing and marketing so many projects at once?

Steve: I try to partition my time so that I'm using different kinds of mental energy in a day. Sending out query letters is a bit more mechanical, so I can do that after finishing writing for the day. Outlining is really mostly about coming up with ideas, so I try to do more walking during that phase. Then after I finish a draft of a script and I'm waiting for feedback I'll do revisions on another script or write a synopsis for another project. It's good to keep busy!

InkTip: You certainly keep busy! Now with nine produced films under your belt and even more scripts written, what is your next goal for your career? Steve: It's been a fairly busy year. I have two spec scripts under option, wrote an indie crime-thriller and an indie thriller/drama on human trafficking in the U.S. on assignment, another TV movie that should shoot in August, and an indie horror that we're hoping will go in the fall. And I'm actually writing these answers from the set of a TV movie that I did a re-write on!

InkTip: Do you find it easy or more difficult to sell a script today than five years ago?

Steve: It feels slightly better now for specs than it did five years ago, but still very tough. Hopefully digital distribution will continue to pick up and provide a marketing model for the kinds of indie genre films that flourished in the 90s when DVD sales and rentals made them viable.

Steve: Frankly, all my produced films have come from my connection with John Murlowski and the people he's connected me to—so pretty significant.

Steve: Don't fixate on one script. For a career you'll need to write a bunch of them. And I'm increasingly willing to work with producers who are starting out or more speculative. Most stuff goes nowhere, but that's true at any level (though upper levels pay much better!) But when you're beginning it's worthwhile to build a network and get experience collaborating on projects … Nothing gets you work like doing work, so my one major suggestion would be getting involved in as much stuff as possible, at whatever level is possible.

Chris Cookson has been with InkTip for over a decade heading up the writers department after managing the producers department.  She has interviewed numerous producers, directors, and screenwriters for the InkTip magazine.  You can read more of her work on her blog Novel2Screen where she reviews adaptations to the silver and small screen as well as interviews with writers, actors, and more.  Follow her on Twitter at: ACCooksonWriter