You Can Write a Killer One-Location Script 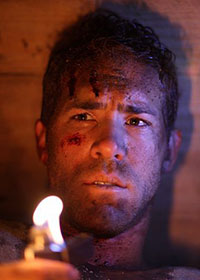 Writing a limited-location script can be tough.

Sure, we could write another script based on the trope of a man who invades a home and terrorizes a family, but how will that script shine?

Obstacles exist when you sit down to write a one-location script.

1) How do you distinguish your premise enough from others?
2) How do you fill the runtime with enough plot?
3) What’s a good reason the story is set in one location in the first place?
4) And above all, does one location really mean a movie will be cheap?

Even if the vast majority of the plot looks like it takes place in one location, extraneous expenses pushes the budget higher than you’d think.

So here’s what you can do to unleash a killer (not necessarily a serial killer movie) one-location script.


Keep the Costs Down

The film Phone Booth (2003) was a successful thriller involving movie stars (Colin Farrell, Kiefer Sutherland, Forest Whitaker) and a big director (Joel Schumacher). Though most of the action took place in one location, the phone booth Farrell’s character was stuck in was pitted against the backdrop of a large city (New York, though actually filmed in Los Angeles) with lots of crowd extras and street closures. The film was still relatively cheap compared to big budget movies ($11 million according to Box Office Mojo), although the budget could have been reduced if the phone booth was in a small restaurant's back parking lot. 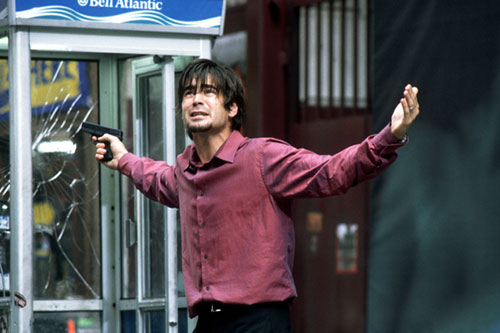 Colin Farrell in Phone Booth (2003) wondering when lunch break is.

Think about where your one location is. The standard home invasion movie can work, but if you want to distinguish your story, focus on settings you rarely see in movies. Think outside - or in the following example, inside - the box.

Ryan Reynolds starred in Buried (2010), playing a character that is – you guess it – buried inside a coffin. The premise obviously helped keep the budget minimal.

If your story type is a bank heist, is this a bank in Midtown Manhattan? If so, the police will arrive, along with a few news outlets and dozens of spectators. This really drives up the budget, so think about a unique spin, where robbers are stuck inside a bank vault at night or perhaps they’re cracking a safe in an office.

Before becoming a huge franchise win for Lionsgate, Saw began as a humble limited-location horror/thriller. Despite its critics, each installment in the series does something very well: it presents moral dilemmas for characters and consequences for those decisions. The whole film’s narrative thrust, in fact, is based on two questions: Will he or she really do that to survive, and, how are these characters connected to each other (why are they chosen by the villain)? Without these two questions, the film would solely rely on production value and gore, and I don’t believe that would have kept the series so successful. In fact, the clever writers and producers began to connect each movie to each other – some films are prequels and others are sequels – so fans can follow a continuous storyline and recurring characters throughout (i.e. a mythology).

Cary Elwes in Saw (2004), wishing the production was not shooting under "French hours"

When you place characters in a tight situation (literally tight in this case), in order to keep the level of suspense, drama, thrills and mystery high, give them a tough choice: Should I or shouldn’t I? What will happen if I make this choice? That way, the audience can live vicariously through the characters and relate to their predicaments.

Another benefit of presenting these choices is it can create a ripple effect throughout the story. If your character must decide between two people to shoot, the choice he makes may not only shape how we perceive him, but it may cost him later in the story.

The moral dilemma has been well-used in stageplays for centuries, which is why stageplays adapted to film, in particular, limited-location projects such as Glengarry Glen Ross, maintain drama with high stakes and moral dilemmas.

If you find your plot is just a series of barely amusing events to fill run time, make it tough on your characters by giving them dilemmas that carry big consequences.

Including flashbacks can kill a limited-location script's flow.

It reminds us that outside of these walls exists a world seemingly more fascinating than this one. Instead of imbuing a feeling of dread that a hero is stuck inside a confined space, flashbacks may communicate that we’d rather have the director cut back to the outside world, or even worse, turn off the movie and literally go play outside. In other words, the audience is reminded they are not just watching any movie, but one that may be suffering from a low budget, relies on flashbacks for exposition, and that would be much more entertaining if it didn't feel so confined.

If backstory is necessary, then craft unique ways to reveal insight into the character’s past. Otherwise, it can come across as lazy and stilted.

Even better, flashing back to events from earlier in the story (something the audience saw earlier in the film) might give us an a-ha moment. Just be very careful as this is hard to pull off.

In the Saw franchise, numerous flashbacks are used throughout each installment to connect the dots from Act 3 to Act 1 and back. This isn’t necessary, and you might even find that the audience doesn’t always need backstory and prefers a bit of mystery.

Think of all the people in your life. If they were trapped in an elevator with you, who would be the first one to panic? Who would take charge?

What if five of your co-workers go out of town and get hammered at a bar? What would be the most bizarre thing for someone to say or do?

Part of the reason why limited-location thrillers may feel uninspired is because not enough character development or character distinction exists.

Think of classic movie archetypes, especially in horror movies (the virgin, the cheerleader, the brat, the jock, the nerd, the token minority) or high school comedies (The Breakfast Club, Mean Girls). How can you turn these stereotypes on its head?

The quicker you settle into easy movie stereotypes, the quicker the audience settles into boredom.

The film Blue Ruin (2014), although not set in one location, was a $400,000 budget thriller that featured a vagrant who lives out of his car. This is not your typical sexy hero. It was just enough to keep us guessing because the hero was unpredictable and a bit emotionally unstable which added an element of suspense. 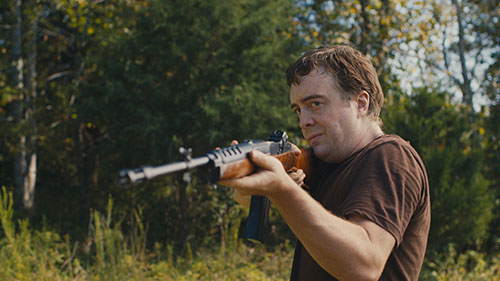 Blue Ruin (2010) followed a character who is not your typical Hollywood hero.

The film The Usual Suspects, played on movie archetypes in a playful way.

If your characters are shallow, predictable and only “movie types” then watching them in one location is going to magnify how shallow and predictable they are.

Remember that in real life, people are often complicated and inconsistent. That has nothing to do with a character’s occupation – after all, how many spies do you know in real life? Instead, remember that time your buddy Dave said something he regretted when he was drunk or how you didn’t realize your boss Susan was a cross-fit champion until you saw her at the gym destroying the competition. People are more complicated than they would describe themselves and it’s up to you to observe.

Find ways to tap into that so audiences are surprised.


How can you breathe life into a one-location script?

1. Keep the Costs Down

Finally, be honest and think: Would I want to see this movie just as a general fan of moveis and not just because it's set in one location?

If the answer is yes, elevate it above the usual.

Michael Kim has worked in every department at InkTip. He is now the VP of Product Development & Media. Besides music jamming, he likes trivia, whiskey and boba.