Simon K. Parker was a British screenwriter who didn't have screenwriting credits or representation. But he knew getting his scripts to producers was the way to move his screenwriting career forward.So he turned to InkTip. He now has his first credit.

His script, Christmas Ranch, was produced by DBM films. The film is available on iTunes, Amazon, Vimeo, Barnes & Noble, Google Play, VOD and in stores at Best Buy, Sam's Club, and more.

Simon spoke with us about how he got his script produced with InkTip, his advice for writers, and more.

InkTip:  How did you find out about InkTip?
Simon: I found InkTip all those years ago through a simple search on Google. I was looking for a way to get my scripts seen. I didn't really know how to approach production companies and seeing how InkTip worked and the success stories made me think it was worth a go.

InkTip: How did you come up with the story for Christmas Ranch?
Simon: I was massively inspired by the film Spirited Away, which I just think is a masterful film. I wanted to write a coming-of-age story about a lost girl who connects with herself thorough something wild. 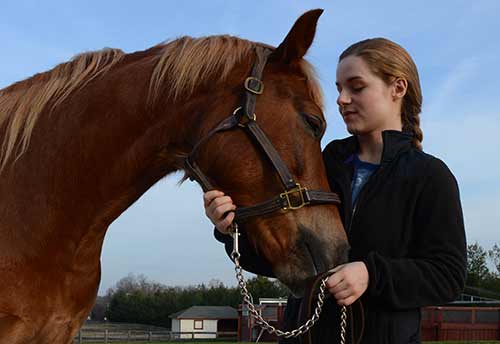 InkTip: Did you set out to write a Christmas themed script or did it happen to evolve into it?
Simon: At first [the script] didn't have a time of year in which it was happening. But as I was writing it I found that the characters were getting ready to celebrate Christmas. So, it transformed into it really. It wasn't my idea; it was the characters who made me.

InkTip: What went through your mind when you saw that Douglas Maddox had a lead in the InkTip newsletter for the exact story you had written?
Simon: I've always written all kinds of different things. And I love writing sweet stories, but I couldn't seem to find a home for Christmas Ranch, so I was overjoyed when I saw what Douglas was looking for and that I could be a perfect match. 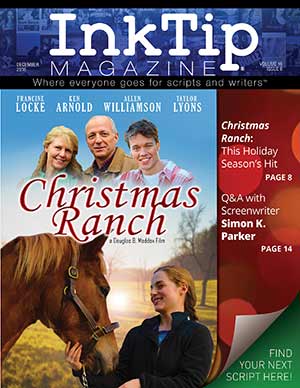 InkTip: You’re based out of the U.K. Many U.K writers feel like U.S. produces won’t bother with their scripts due to location. Can you talk about your experience working across the pond with an American producer?
Simon: I have to disagree with many U.K. writers on this I'm afraid. I find it almost impossible to get my work into the hands of U.K. producers, production companies, or agents. I feel U.S. producers are more willing to take a chance. A lot more willing to look at the work of an unknown writer, whereas in the U.K. it feels to me like you need to be already established. I had no credits to my name, but Douglas liked my pitch and was willing to read what I had written.

InkTip: Were you able to visit the set at all?
Simon:  Unfortunately, the Atlantic Ocean stopped me from visiting. But I loved the videos that Douglas shared, which made me feel a part of the process. Douglas was kind to send me a very early screener of the film, so I have watched it with family and friends. And on a personal note seeing my name credited as the writer was hugely uplifting. Made all the hard work worth it.

InkTip: Michelle Norton was brought on for rewrites. How did the rewrite process go with you in the U.K.?
Simon: I wasn't there for any of that, but was happy and trusted Douglas when he told me about what changes he wanted to make and the faith that he had in Michelle.

InkTip: Now that you have a produced feature, do you approach the writing process any differently than when you were just starting out?
Simon: My writing process has changed dramatically. I'm so different now from when I started out. It's much more of a science now. I plan, plan, plan, plan. Whereas before I would just write whatever came into my head and then spend months and month re-writing over and over until it made sense. I'm much more clear in what I want to write before I start … All I think about is my writing. I go to sleep thinking about it. I wake up thinking about it.

InkTip: Is there a part of the writing process you love the most?
Simon: I always love Act 2 of any of my screenplays. Just so much fun to write. Joining Act One onto Act Two is always a fight. But it's so satisfying when you get it right.

InkTip: How do you get through writers block?
Simon: I walk away. I don't write anything. I just let the writer’s block take care of itself. I watch films, I go for walks. This could take 30 seconds or a couple of weeks. I used to try and force it, just try and write anything, but it never worked. If you have writers block don’t fight it.

InkTip: What advice can you give other writers who are trying to get their foot in the door?
Simon: I wouldn't have a career without InkTip … [And] don't give up. I heard this myself over and over. And normally I rolled my eyes pretty hard whenever someone gave me this advice, but it's true.

Chris Cookson is the editor of InkTip Magazine and heads up the Writers Department at InkTip, where she helps screenwriters connect with established producers to sell their scripts. She is also a novelist and short story writer specializing in Young Adult fiction. Her popular blog Novel2Screen focuses on the art of adaptation and everything to love and hate about it. Follow her on Twitter at ACCooksonWriter and read her blog at Novel2Screen.net.