What's the Meat of Your Script? Part 2 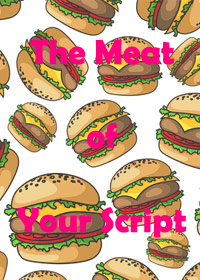 This is a follow up to part 1 which showed how being vague in your logline pitch is bad. Very bad.  This explores the opposite approach – dumping too much information onto the reader.

There’s an expression I learned in sales: Don’t kill the sale.

Once someone is sold on an idea/product/service, shut up and let the interested party act. The more you talk, the more you plant doubt or questions into their heads. Their “yes” turns to a “I have a lot of questions, but no time now – I’ll get back to ya.”


Similar to less is more, here’s how “Don’t kill the sale” applies to your screenplay pitch:


Get to the Point
In your logline, start with the premise right away. Don’t tell the reader it’s a hilarious comedy or a sophisticated drama or a grotesque horror.

No:
“In this sendup of 1980s teen summer camp comedies, a counselor discovers his psychopathic but super hot and charming ex-girlfriend is the other head counselor.”

Yes:
“A summer camp counselor discovers his psychopathic but super hot and charming ex-girlfriend is the other head counselor.
[Parody of 80s camp comedies]”


Clear premise, Clear Storyline
If your script has a clear, strong premise with a captivating throughline, then let that shine. Once you begin to deviate by including all of the other storylines, you lose your reader.

You can hint at a twist or subplot with the hook, but only if it’s relevant to the main storyline.

No:
After receiving a phone call from his kidnapped daughter, a retired special agent must use his special skills to find her while traveling to various locations, despite the fact that he hasn’t been as close to her as he should have been lately.

Yes:
After receiving a phone call from his kidnapped daughter, a retired special agent must use his special skills to track her down.


Extras: Only the Facts
If you want to include extra info in your logline, it’s usually best to leave it at the end. An exception would be if your script won a major contest (and I mean, a major one).

Stick to facts. Don’t use hyperbole, don’t beg the reader to read it, don’t say that your script will change the world, leave audiences crying and laughing, don’t tell the reader how to behave or feel or think.

Stick to facts. Did it win a contest? Did it get good coverage? If it is not a fact, then leave it out of your logline.

As a reminder, I’ll leave a helpful tool for crafting your logline. This will work with most genres for non-experimental screenplays.

Who = Your protagonist(s)
Does What = What are they doing?
Why = Sometimes this is evident. Other times it’s the why that makes a good hook.
What stands in the way = Why won’t the protagonist succeed? You could also call this the obstacle. This isn’t always necessary if it’s evident, depending on the genre and tropes. But, often you’ll need this because this relates to conflict.

Striking the balance between too little and too much is about simplifying. What is the most compelling aspect of your screenplay? If you can boil it down to 1 or 2 things, you’re already on your way. If you can’t, you may need to work on the script itself instead of how you pitch it.

Michael Kim has worked in every department at InkTip. He is now the VP of Product Development & Media. Besides dumplings, he likes underrepresented actors, getting to the point, and this is too long.