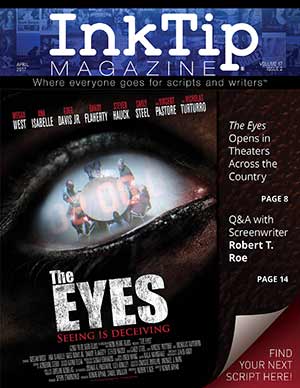 Robert T. Roe is a Portland-based screenwriter who wrote the limited location thriller, The Eyes, hitting theaters this month, which was discovered on InkTip’s site.  Back when Captain and Tennille were singing about their love keeping them together, Robert appeared in the Micky Dolenz film Keep Off My Grass!  He attended the Pasadena Playhouse College of Theater Arts for a year but realized writing was his real passion.  He studied under “every teacher he possibly could in Hollywood,” and he took to writing scripts.  Recently, one of his scripts made it into the hands of George Clooney’s company.  “Now I can name drop despite being passed on!” he jokes.  He also conquered the trifecta of the film world when he co-produced, co-directed, and wrote the feature film Rebecca’s Room.  Robert stepped away from his writing to chat with InkTip about The Eyes and how he tackled a limited location, ensemble piece.

InkTip:  How did you come up with the story for The Eyes?

Robert T. Roe:  I signed up to get leads from producers seeking scripts from InkTip.  Some of my scripts require a lot of money to make, and I noticed there was a real need for single locations, lower budget stories.  These are difficult to dream up.  Yet, there are many great movies.  In the news at the time were stories about surveillance issues with the government over-stepping itself.  Bang.  What if I created a single location story about this issue?  So I did.

Another thing in the news was that someone in Congress attached a crazy little bill to a huge spending bill.  When it was discovered, no one – and I mean no one – would admit to putting that crazy bill in the mix.  It became law.  So, what if, to save money, let’s say, President Trump decided that if  he could absolutely prove through the use of video and surveillance someone is guilty of murder, why not just have a team to execute them and save the tax payers money on a big trial?  But watch out, there is a twist at the end.

InkTip:  The film is an ensemble piece where each character has a sordid past that is revealed.  How much work on backstory for each character did you do?

Robert T. Roe:  Some, but I personally don’t believe in a lot of backstory because you could lock out some really good revelations about that person.  What I look at first is “who do I need to move this story forward?”  Everything that happens and every character along with their words should do that.  The characters in this movie have to have the sordid past of murder to move the story forward.   “The Eyes” of surveillance caught them in the act, but how and when that is revealed is part of the tension, conflict, and drama of the story.

InkTip:  Who was your favorite character to write and why?

InkTip: Who gave you the most trouble and why?

Robert T. Roe:  The writer is the creator of the world the story lives in.  No character is trouble when the delete button is so available.

InkTip:  How do you get through writers block?

Robert T. Roe:  Block is a message from the brain that you don’t know your story as well as you should.  It’s on our side and is trying to slow us down so we don’t waste our time on a bad story.  Otherwise, it would be like Old Faithful and blow out of us.  I say the story idea is the problem and not that of an experienced writer.  For me it is usually that I don’t really like the idea as much as I thought but I didn’t realize that right away.  I move on to something else.  Then one day while driving or taking a shower, POP, the solution arrives.  Then fear sets in that I don’t forget it before I write it down.

InkTip:  How do you know when to finish a script or when to throw the towel in and realize it simply isn’t working?

Robert T. Roe:  I don’t allow myself to have this problem because I learned from people like Robert Kosberg (Pitch King) that you always start with a good idea.  That means you don’t start with a bad idea and hope that somewhere along the road by page 50 it magically will become a good story.  Can you put your idea in a single sentence?  You should be able to before you start to write.  Do you like the idea?  Does it excite you?  Now, this does not mean that everyone else will like your story, but it does mean you don’t have to throw any towels away.

Robert T. Roe:  It has to be after multiple rewrites, but I had to learn this the hard way.  Yet, I have heard horror stories about people that work and rework scripts for years.  At some point you have to decide if the story you see in your head would be enjoyed by audiences everywhere and be honest about it.  Then it is ready.  Besides, you will probably have to change something anyway when a producer gets a hold of it – so, get it out there on InkTip!

Robert T. Roe:  If it had not been for InkTip I am not sure I would have ever had this interview nor this movie coming out.  We writers have to have a way of getting our stuff out there, other than an agent, to be seen.  InkTip works and is affordable.  Not only that, but they will give advice from time to time on how to make your story or logline better.  Also, older stories pass as new on InkTip when fresh producer eyes read your logline and then perhaps your script.  I have a once optioned script that will be on InkTip until it is made or I die.  It is controversial and there is a camp against it, but it is really, really good.  On InkTip, it stays in the running until Hollywood catches up to how good it is.  That’s my opinion, and I’m sticking to it.

InkTip:  What is next for you?

Robert T. Roe:  I just registered my new script Grandpa and the 25th.  It’s based on the true story about a group of black soldiers that became the first Infantry Bicycle Corp in 1896 and made a historical trip to Yellowstone Park from Missoula, Montana.  I love how it came out.   I also am planning on adding more episodes to my comedy TV series, The Sound, and starting the movie The Curse of Optimism.  I’m also interested in doing more directing.

InkTip:  What advice can you give other writers who are trying to get their foot in the door?

Robert T. Roe:  If you love to write, then your foot is already in the door.  Money and success would be and is nice, but it starts with either you are a writer or you are not a writer.  If you are not a writer don’t try to get your foot in the door.  If you are a writer just keep writing and enjoy the process.  I once was at an interview with Ted Elliott and Terry Russio (Pirates of the Caribbean series).  Two things I took away from them are that a scene must be cinematic and that they write from cinematic moment to cinematic moment.  That lesson helped me tremendously, but I didn’t hear it until after five years of writing.  You learn as you go if you stick to it.  Now my foot is in the door.