What I Learned in Film School Part 2 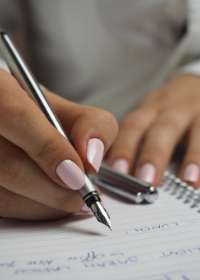 I spent an excessive amount of time in film school—six years to be exact, and if that sounds familiar to you, that’s because you read the first part of this series. In that article, I went over why writing groups are a great asset.

Now, I want to talk about how to take notes, and to start, I need to give you an example.

There was a writer in one of my classes who was inspired to write a script based on a folk song he heard. We’ll call this writer John. John’s idea was bizarre (in a good way), and it could have gone in a lot of different directions. When his first deadline came, it was clear that he needed help. A few of the problems he had with his pages included action descriptions bordering on prose, extremely complex character mythology, and a glacial pace.

The protagonist didn’t show up until about page six, and the location where the majority of the story takes place showed up on page 18. Within those 18 pages, there was no story drive. It was simply people walking and talking.

My classmates and I made it clear what wasn’t working and why. John’s response was that we didn’t know what was coming later in the script, and this brings me to my first point.


1) Write down every note you receive.

It doesn’t matter what you think of a note or who the person giving it to you is. When you hear that note, nod your head, write it down, and acknowledge what they’re saying. Why?

First, there’s a part of you that is on the defensive because you’re vulnerable. After all, you’re putting your work out there. You might react like John and think, “They don’t know what’s coming later in the story.” That’s right. We don’t know what comes next, but that doesn’t mean your script doesn’t have a problem now. Keep an open mind and accept the discomfort of someone critiquing your work.

Second, you want to foster an environment of collaboration and respect. If you disregard someone’s feedback because you don’t agree with them, you’re making them less inclined to help. If it’s a producer, you’re sabotaging your relationship with them. Be someone that’s easy to work with.

“How do I find a way to address a note while staying true to my story and characters?”

This is honestly the most fun part for me, especially if the notes I receive are creative. When I say creative, I mean a reader suggests that I put a fire truck in a quiet dinner scene. It could be that the reader really likes fire trucks, or it could be that there needs to be some “flashing lights” in the scene. It needs spice, and it’s up to me on how to add it.

This might be controversial, but I don’t believe there are good or bad notes. Sure, some might not appear as useful as others. There’s a famous clip of Kevin Smith talking about his experience working on a Superman script. The producer he worked with insisted that there should be a giant spider in the script. I recommend searching “Kevin Smith giant spider” on YouTube. It’s a good laugh.

That being said, most notes are useful in making you think about why someone would suggest changing an element of your script. You have to think like them for a moment, and hey, as writers, we pretend to think like other people all of the time.

While on that subject, there’s another thing you must do when receiving notes.

Your readers aren’t going to pick up everything. They might completely miss what you believe to be key moments of your script. As writers, we can make the assumption that what is in our head is on the page, and we have to reconcile that by asking questions.

“Did you understand why this character did this?”
“The reason I did this was because… Did that come through?"
“Does this scene work?”

Note that I didn’t say defend your artistic choices. Defending implies that your readers are attacking you or your script. You want to keep a positive mindset, which is my final point.

Even if you believe you’re being flooded with notes, remember that you’re doing something that you love.

Originally from St. Louis, Sean Thompson studied screenwriting for six years, earning a BA and MFA from Webster University and Chapman University. He recently started overseeing the Marketing Department at InkTip. When he’s not writing, he’s keeping his cats, Simba and Scar, out of trouble.