Facing Down the Blank Page with Screenwriter Ron Maede 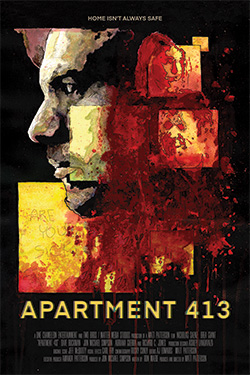 It’s never too late to start writing, but Ron Meade wishes he’d taken his first steps into screenwriting sooner. Living in the heartland of America, he dabbled in stand-up comedy, improv, and took writing classes, but waiting for the perfect script idea to crystallize didn’t help his screenwriting goals.

When he finally hunkered down and wrote his first script, The Organ Grinder, about a man who auctions off his organs online, it became a top-ten finalist in the Chicago Film Office competition. He decided to take his new career further by moving to Los Angeles and using InkTip to market his scripts.

Director/producer Matt Patterson discovered Ron’s single location thriller Apartment 413 on our site, and it’s now making its rounds through the festival circuit. Most recently, it was nominated for Staff Choice at the Austin Film Festival!

Ron shared his thoughts on waiting so long to follow his dreams, the challenges of writing limited location scripts, and more.

Chris: How did you come up with the idea for Apartment 413?

Ron: I got out of the shower on January 16, 2015 and wrote down an idea that popped into my head. “Idea for a tense, suspenseful feature that that takes place in an apartment between mostly two characters. Man and a woman. In a relationship. She's pregnant. He's ordered to kill her. We think. Maybe. Maybe he just picked up somebody else's phone. It's a miscommunication. It comes out slowly. It's a thoughtful, brooding piece. She's not there in the beginning.” I started writing it formally about 11 months later.

Chris: How hard was it to limit yourself and the script to essentially a single location, and why did you make that choice for the story?

Ron: Yes! By far the most difficult aspect of the story was keeping it contained. I had a note taped over my computer that read, “Don’t be boring!” That was my biggest fear; that I’d be stuck in this apartment and it starts to drag. Interestingly, it looks like I might have compensated too much in the other direction. I use a lot of arguments and fighting to keep the tension turned up. Well, some early readers wondered what these characters saw in each other that made them fall in love and have a baby. “All they ever do is fight!” So Matt [Patterson] very quickly asked me to tone it down in the rewrite phase. Also, I didn’t have enough sense of the production process to know that Matt would be able to keep the thing humming even when there were no major moments.

Chris: What was your favorite part of making Apartment 413?

Ron: By far, the best part of making a movie is working with a crew of people that are bringing your vision to life. The creativity and dedication they brought to the project is extraordinary. As an example, at one point in the script, I wrote: “The kitchen is a mess. Coffee cups, toast crumbs, and left-over Thai containers.” And what do I see on the first day of filming? This exact tableau perfectly rendered, all the way down to the crumbs! Really blew me away. I had always assumed they would treat my words like suggestions, but no! They treated the script like holy writ! Newsflash: be careful what you write. Words matter!

Chris: I’d love to delve into a debate about what truly happens in Apartment 413, but I don’t want to give anything away to readers.  What do you want audiences to take away from the film?

Ron: There are a few thematic messages that stand out, but for me the main one is, “Don’t be afraid to seek help.” I think men especially have a knee-jerk reaction to ignore their needs when it comes to mental health. There’s a built-in stoicism that comes with being a guy. We are wired to “tough it out.” Super unhealthy attitude. I would be happy if audiences walk out of the theater just feeling like they had a good time, and we lived up to their expectations. We gave them their money’s-worth and didn’t take their time for granted.

Chris: Can you tell us about your writing process and when you know your script is ready to post on InkTip?

Ron: I have become a dedicated outliner! I’ve done it both ways. Rushing through it because I’m super excited or slowly building out the story beat by beat and deliberately not writing until you’re ready. The latter is far superior! Also, don’t talk about it! Your idea is like a big balloon. Talking just pokes holes in it and weakens it. It’s also a way of negating one of your prime motivational drivers because it satisfies your desire for an audience. DON’T TALK! Also, I’m not a fan of notes either. I like to think for a long time before I start writing notes to myself. When I get into the car to drive to work, I’ll ask myself, “Okay, so then what happens?” Oh, and very important, make sure you hammer out act two. Virtually all of your exciting ideas are either act one or act three. Everybody ignores act two. Always have act two totally mapped out before you start writing anything.

Chris: You’ve also worked on the producing side of the industry. How has the knowledge you’ve garnered from being in production benefited your writing?

Ron: Some friends have awarded me production credits on their projects for basically being a glorified production assistant. It has been a fantastic learning experience. The biggest takeaway is to always be there for your pals in the business. If you can be the guy who shows up and makes sure lunch is taken care of or whatever, you should do it. These people will all go on to do big things in town, and you want them to return your calls.

Chris: What’s the one thing you wish you knew earlier in your career?

Ron: Oh my God, great question! So glad you asked this. I spent years trying to think of a concept that was “good enough” before I wrote a word! This was a huge mistake. I wish somebody had told me to just write it. Heard of it a million times? Write it. Too expensive? Write it. Too dumb and nonsensical? Write it. Warner Brothers’ just greenlit a project that’s exactly the same? Write it. Do not wait! Waiting is the real killer because you’re never getting those years back. Nobody is going to make one of your first scripts anyway, so it doesn’t matter how cliché, expensive, or out-of-fashion it is. Get those first few under your belt. You won’t believe how much your writing changes once you’ve faced down a blank page 500 times.

Ron: I’ve been working with Abigail Breslin (Little Miss Sunshine, Zombieland) on a vehicle piece for her. I was recently asked to write a horror pic for a couple of producers from The Bachelor. And I’m putting the finishing touches on my best spec so far which should be done in a couple of weeks! Look out world!

Chris: Apartment 413 is making the festival rounds now, and we encourage everyone to check it out—and clean their air filters ASAP!

Ron: Thanks to everybody at InkTip for highlighting Apartment 413.  We really appreciate everything you’ve done for us!