Unrealistic Goals Can Help You More Than You Think 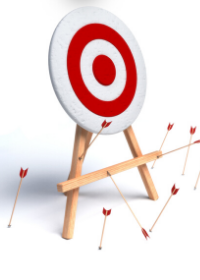 My fellow InkTipper, Sean, philosophized about goals with you the other month.  He wrote about realistic vs. practical goals, the pitfalls and anxiety they create, and being specific in what you want to accomplish. All good stuff. If you haven’t read it yet, check it out!

I approach goals from a different point of view. After attending the 2018 Best Year Ever Blueprint conference in San Diego, CA hosted by Hal Elrod creator of The Miracle Morning and Jon Berghoff, creator of XCHANGE Method, I left with a number of empowering thoughts. One that has stuck with me over the years—and I’ve implemented ever since–is set unreasonable goals.

Sounds crazy, huh? If you set a goal you know you can’t reach, you’ll fail and quit before you get going, right? That’s what we’ve been programmed to believe.

Here’s the secret: the goal is NOT the goal. It’s all about what you do to try and reach your goal. That’s the endgame. It’s all the hard work of trying to meet your goal. Why set realistic goals? Why push yourself if your goal is reasonable? If you can obtain your goal in a month, what good is that? Will crossing that finish line really push you to be a better writer, director, producer, or person? No, because it’s safe. It’s manageable, and instead of focusing on improvement, you are focusing on something obtainable.

Create a totally unreasonable goal. Go on, do it.

Ok, back this up. It needs to be within reason. My son, who dreams of becoming a marine biologist, wants to join forces with his herpetologist-wannabe friend and spend their adulthoods on a boat searching for evidence of dragons beneath the sea. Let’s keep the fantasy in our fiction. What is an unreasonable goal that will push you to self-improvement?

Here was mine last year. I wanted to start a novel in January 2019 and finish by June 2019. I knew that goal was impossible. I work a full time job, volunteer absurd hours, and am raising a family. It also took me ten years to write my first novel and five to write my second. I knew I wouldn’t be writing another in six months. I set this goal anyway.

With the guidance of Hals’ Miracle Morning routine that I adapted to my writing dreams, I got up at 5am most mornings to crank out pages. As June crept up on me, I knew I would never reach my goal. But by June, I had half a novel done. HALF A NOVEL! I didn’t achieve my unrealistic goal, but I sure celebrated how far I came. And without setting such a lofty goal, I never would have pushed myself to get out of bed, meditate, and write.

If you’re a director needing to raise funds for your film, don’t aim for what you think you can raise. Aim for so much more! Push yourself to double your budget. You may find yourself more inclined to increase your networking and ask people you may not have considered. You may not reach your unattainable budget, but you may raise more than you had hoped.

The key to any goal, which Sean discussed in his article last week, is creating a game plan. Even if your goal is unreasonable, you need to devise a plan to keep you on the path towards it. Without it, your ship may flounder, perhaps washing ashore on a desert island where you campout for a while with some dragons, realizing later that you’ve spent days not sailing in the direction of your dreams.

My plan was to incorporate the Miracle Morning into my writing and keep typing away regardless that I knew I couldn’t write a novel in 6 months. If I hadn’t set such a challenge, I wouldn’t have had a reason to push myself.

It’s not the goal. It’s the journey. Who will you be on the other side?

Chris Cookson is a novelist and short story writer specializing in Young Adult/Middle Grade fiction. She is the editor of InkTip Magazine and heads up the Writers Department at InkTip, where she helps screenwriters connect with established producers to sell their scripts. Her popular blog Novel2Screen focuses on the art of adaptation and everything to love and hate about it. You can follow her on Twitter at ACCooksonWriter and at Novel2Screen.net