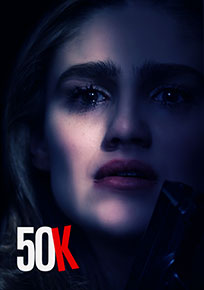 Andrew Costello’s journey to produced screenwriter wasn’t planned as much as an epiphany. He stated that he woke up one morning in his 30s, depressed and disappointed with his life, and realized he needed a drastic change. The one thing that always inspired him was writing. So, he got to it. As he said, “It took years of working endless hours on top of my low paid day job, but eventually, I got good at it and started selling scripts.”

One of his sold scripts is now the produced feature film 50K, which is coming to streaming platforms this spring. Andrew shared his thoughts about his feature opening to the world.

Chris: What is the story of 50K, and how did it come to you?

Andrew: It’s a contained thriller about a group of desperate people who kidnap a businessman but come to regret it when he doesn’t give them what they want and tells them a few hard truths about themselves. I decided I wanted to do a series of screenplays that could be made well on a low budget, and this was one of them.

Chris: Who was your favorite character to write for 50K?

Andrew: I loved the character of Reiko. She looks like an angel but acts like a demon. She is the type of villain that I would remember if I was part of the audience.

Chris: 50K is your first produced feature. What goes through your head when you realize your writing will be airing on Roku, Tubi, Peacock, and more?

Chris: What are your favorite films, and how has that influenced your writing?

Andrew: Aliens and Dredd compete for my favorite film, but I love anything that is interesting and well-written, albeit that seems to be something of a rarity now. I lament the demise of good stories and good characters in modern studio films, so when something truly excellent comes along, it is a great day to be watching films. At least for me.

Chris: What has been the most challenging skill for you to develop in your writing?

Andrew: Patience. Definitely, patience. Screenplays don’t happen quickly, and you have to understand that writing films is a long-term commitment if you want to turn out a quality product. Then getting it onto screen can take even longer than that.

Chris: What’s one thing you wish you knew earlier in your career?

Andrew: The business side of the industry, especially when it comes to holding onto intellectual property rights. Yeah, I made some pretty big mistakes there!

Chris: Are you currently represented?

Andrew: Like all writers, I used to think that I needed an agent, but after my first two deals, I realized that I could get by without one, mainly because I like doing low budget independent features and am not that interested in studio work. If one comes along, great. If not, well, that’s fine too.

Andrew: Right now, I am working on a script called Parallel for Bridge Entertainment, which is a low budget sci-fi story about a scientist trying to work out if he is going insane or whether his experiment accidentally pulled him into another universe. That is my number one priority at the moment because it already has funds committed for filming.

But I also have a novel coming out this year called World Undone, which is a zombie novel featuring a new type of zombie that is a lot more scientifically based than anything else I have seen on screen or read. I am enjoying writing it because I got to talk to a lot of biologists and neurologists, and there is just something extra special about knowing that there actually IS a way to find yourself getting eaten by the living dead.
After that, it’s on with a gangster flick, but I can’t really talk much about that one due to signing an NDA.

Chris: I’m not sure I want to know if I’d be better served up raw or in a curry sauce. However, I do know you’ve using InkTip for years, and I’m curious what about our services do you like the best?