Why You Should be Reading Plays 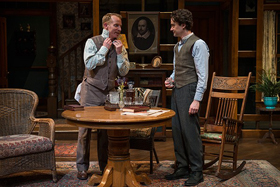 As InkTip users, you probably know that independent filmmaking is our JAM.

You might be surprised to hear, then, that the theatre has more in common with indie films than you realize — and there might even be some ways that reading plays could push your writing to be better!

Here are a few reasons why you should be reading more plays:

If you’ve read any play at this point, you will likely realize that quite a few of them are set in one, static location.

At one point referred to as drawing room plays, these dramas became popular in Victorian England because they were frequently performed as amateur productions in private homes, but became popularized because static sets were cheap and easy to produce.

Examples of these kinds of shows include The Importance of Being Earnest by Oscar Wilde, and a number of Noel Coward plays.

Most of these shows are set in one location, and as such cannot rely on action to maintain their audience’s attention in the way that film can. They must overcompensate through an element that is often lacking in film: the dialogue.

Because theatre can’t rely heavily on action, the dramatic tension must fall on the characters and their way of interacting. Relationship dynamics must be clarified through dialogue exchanges rather than car chases, and their character arcs are pushed forward through monologues rather than shootouts.

There’s nothing quite like sitting in an audience during a performance of Eugene O’Neill’s A Long Day’s Journey Into Night, and feeling the weight and desperation of Mary Tyrone’s life choices as her drug-addled final monologue brings the curtain down. We didn’t need to see her life choices spelled out in a convoluted flashback — her words were enough to make us understand.

If you want to learn how to write great dialogue, go grab a copy of David Mamet’s Glengarry Glen Ross, or Tennessee Williams’ A Streetcar Named Desire.

Playwriting has been an art form for millennia — long before film came around. As such, when the playwright has the self-imposed constraints that plays put on dramatic storytelling, they find equally more unique and nuanced ways to tell story.

You would be surprised by how many genres and topics theatre can cover — and because they don’t have the luxury of a Hollywood budget or special effects (barring some Broadway productions like Spider-Man: Turn Off the Dark), they have to find increasingly more inventive ways to tell their stories.

For instance, Jennifer Haley’s The Nether deals with a police officer inspecting a ring of pedophiles in a virtual world, and yet the entire play never leaves two locations.

Many well-known screenwriters got their start in playwriting: Roberto Aguirre-Sacasa, showrunner and creator of Riverdale and the Chilling Adventures of Sabrina, co-wrote Spider-Man: Turn Off the Dark and American Psycho the Musical. David Mamet, who wrote the 2001 film Hannibal, won a Pultizer for his Broadway play Glengarry Glen Ross. Many more go on to write film adaptations of their successful plays, such as David Lindsay-Abaire, who adapted his Pultizer-winning play for the screen. Even this past year featured two award-winning film adaptations of plays with Ma Rainey's Black Bottom and One Night in Miami.

More than anything else, theatre still survives because we have an innate desire to tell stories. If we—as writers—want to learn how to tell the best story we can, then we need to look to the ones who got it right before us.