5 Tips for Writing Your Personal Message 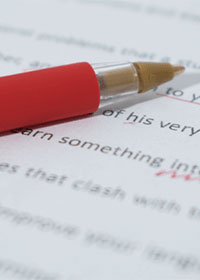 If you’ve pitched to a producer, you’ll know how important your personal message is. It’s one of the first things producers see of your pitch, and it may determine whether or not they’ll read your script. A poorly written personal message could deter a producer from reading a truly great script.

So what can you do to make sure that your personal message makes a great first impression?

Your personal message is essentially your introduction to the producer. Keep it professional but friendly! Make sure that the producer gets a sense of your personality, but don’t be demanding. And certainly don’t make unrealistic statements in your message like “my script will make you a million dollars.” You can’t guarantee that, so don’t say it!

Remember, if a producer doesn’t respond in a few weeks, it’s fine to send a follow up—but leave it at that. Anything more may be considered rude.

An InkTIP: Using the word “love” in a formal email can be seen as unprofessional or overly casual. For instance, instead of, “I’d love to chat over a cup of coffee,” try using like or appreciate.

2.     Tailor your personal message to the script request

When you’re looking at a lead, scan the copy for a few specific keywords and address them in your personal message. This is a thoughtful way of communicating to the producer that you paid attention to their request, and a great way to show them that your script is a good fit for what they’re looking for.

An InkTIP: Be sure to address specific aspects of the lead meaningfully. You should consider succinctly explaining what prompted you to write your story. That may give producers more insight into you as a writer.

3.    Make sure to sell yourself (and your script)

When you introduce yourself in your personal message, make sure to include any information that would make you stand out from other writers. Tell the producer in the personal message space why your script fits their mandate.

When you’re including information about yourself, make sure the personal info you include is relevant. For instance, it would be pointless to include that you were born in Texas unless the producer says they’re looking specifically for script set in that state, and that they especially want a Texan perspective.

An InkTIP: If your script has won any contests or accolades, list that in your personal message! That’s a good way to sell yourself in a relevant way, and demonstrate that your script is a cut above the rest.

It’s fine to let producers know that you’re willing to tailor your script to their needs. This includes changing budget, location, and cast size. Doing so can illustrate to the producer that you’re easy to work with and willing to take constructive feedback.

On the other hand, if they have a budget in mind, it’s probably not something they can easily change, and being demanding can send the impression that you will be difficult to work with.

An InkTIP: When discussing tweaks you can implement, make sure to be as specific as possible. Saying, “I can cut the budget a ton,” is a less likely to get a producer’s attention compared to, “I can shrink the budget by $50K by reducing the locations from five to three, removing a car chase, and combining two characters.”

Before you send off a personal message, make sure to run it through spellcheck to ensure that there aren’t any typos or major grammatical issues. Afterwards, read through it again because some mistakes may slip past spellcheck, and you want to make sure your personal message flows.

Two InkTIPs: If you want to go a step further, check out Grammarly. It’s an AI-powered app that will inspect your writing for typos, grammar issues, and syntax.

It’s also recommended that you read your personal message out loud. As you go through, you’ll be able to find any mistakes and tighten up your message.