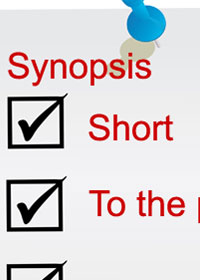 One time, a script doctor friend of mine called to tell me about this Dickensian script someone sent her. She said it was the best of story and the worst of writing because it committed nearly every cardinal sin of screenwriting in just the first ten pages, and yet the producer she worked for was still offering a lot of money to buy it from the author. And she was pulling her hair out in frustration as she struggled to turn all the meandering action lines and descriptions of non-visual and non-auditory experiences into a viable shooting script.

For example, on the very first page, a character actually said "I wonder what's in this glass" while picking up the glass. Then moments later, as the character sniffed the contents of the glass, the writer actually described what the contents of the glass smelled like, apparently unaware that Smell-O-Vision cinematography hasn't been invented yet. So I asked her how this thing ever got optioned in the first place, and she replied "you have to read the synopsis, it's actually quite good."

So I did. And I was impressed. I mean I'm no film scholar, but I know the feeling you get when you see a truly remarkable movie for the first time, and this story left me with that same feeling. It was like reading the synopsis for The Matrix or The Sixth Sense before seeing the films. It just had a really brilliant twist and was based on a really great idea, so good that I could picture lines forming outside movie theaters, fan sites springing up, t-shirts getting made... OK, maybe this is all hyperbole on my part; taste is indeed subjective, and I'm sure a lot of people who read that synopsis didn't like it as much as I did. Nevertheless, the synopsis told a pretty compelling story.

And story is what producers look for first and foremost. Any good producer knows that finding the right script is a numbers game, so any good producer will read a synopsis before opting to read a script just because it enables him or her to get through more material faster. So if you want to tell your story, if you want to get your script read and considered, you necessarily have to write a synopsis that gets your script onto the reading pile. And somewhere over the course of my almost seven years helping producers find scripts through InkTip, I've learned an easy synopsis trick that'll help you accomplish that objective.

But we can't talk about writing the synopsis without talking about story structure, so let's first assume your script has all of these following elements or beats:

I know there's a lot more to your screenplay than just these ten beats, but these are the basic story elements you need to summarize your story. Depending on your genre, you might need to include more than ten beats; for example, if you're pitching a myth story, you might need to introduce a talisman (like when Obi Wan gives Luke his father's lightsaber in "Star Wars"). Or if you're selling a Sci-Fi story, you'll have to explain the key technology and how it affects your story world (like the ability to predict a crime before it happens in "Minority Report"). So do feel free to include more than ten beats in your list. But make sure you have at least those ten beats above.

Now here's the trick: when you write a synopsis, list all the beats first so you can check them off as you go along. And then try to put them all in there while you write, while taking up as little space as possible. The end result usually winds up looking something like this:

Bobby Gyro always wanted something (need), but since he came from a limited background (mundane world), getting it was hard. And when Matt Bagoy (antagonist) did something really appalling (inciting incident), Gyro knew he had to do something about it (plan).

He starts doing something (plan in motion), but it doesn't work out, and he gets desperate enough to break the law (revealing his shortcoming). His friend Kate (ally) keeps telling him he's doing the wrong thing, but he doesn't believe her until too late.

Arrested and imprisoned, Gyro comes up with a new plan. He sets it in motion, despite some difficulties, eventually going head-to-head with Bagoy, whose plan is still better. But Bagoy makes the same mistake that landed Gyro in prison, and Gyro is able to use what he learned from his first attempt (inner change) to win the great battle.

Gyro kicks Bagoy's ass, hooks up with the hot chick, and returns to his old town stronger and wiser than before (completed character arc).

And that's it! Of course, you can use a checklist or you can just use the "synopsis" above as a template. But always remember, your synopsis should be short, brief, and to the point. A synopsis should be more than just a paragraph in length, but never more than a full page; ideally it should come out to about a half a page, or 400 words or less. That way, if you're putting together a one-sheet, you'll have room for a logline and a brief resume or bio. Or if you're writing a query letter, you'll have room for a date, an address and a signature.

Here are a couple principles to keep in mind while writing a synopsis:

Don't leave out the ending. Remember that producers are looking for story first and execution later; leaving off the ending is less likely to get them interested in the script and more likely to make you look like a noob.

Do hint at the problems you solve in your script, but don't solve them in the synopsis.

In fact, leave out any detail that doesn't tell the hero's story; dialogue, subplots, peripheral characters, and details like the type of gun do not belong in a synopsis. Unless that .357 five-shot snub-nose revolver is integral to your story in a way that a 9mm Baretta 92fs could never be, just call it a gun.

Use simple language. You want your reader to focus on your story, not your vocabulary.

How did that amazing synopsis I mentioned earlier manage to be so much better than the script? Honestly, I don't know. All I can say is that the writer managed to get his script read and considered and eventually sold despite the fact that it read like a first draft by a first time writer, and he did this by writing a synopsis that hit all the major beats in the story without wasting any space on anything else. Ultimately, it takes a lot more than a good synopsis to sell a story, and I'm sure he had other things going for him as well. But the good synopsis, in this and in many other instances, was by far the writer's most important selling tool.

Jared Wynn has interviewed thousands of producers, agents and managers about what they're looking for in a script or writer, and he happens to know a thing or two about marketing your screenplay.