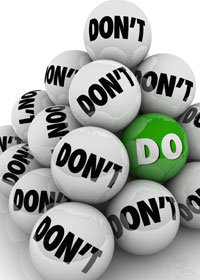 Screenwriting is more than just don'ts.

Over the years, I've read thousands of scripts as a producer and former VP Development for companies at Sony, Universal and Disney and had to separate the wheat from the chaff. Many times, I heard pitches that sounded absolutely fantastic in the room and I was certain I would option the project. But then after reading the screenplay, the execution fell short, and what initially sounded like a definite sale unfortunately became a definite pass.

Execution has to do with whether or not the concept is successfully executed on the page in terms of character development, structure, set up, pacing, dialogue, and the overall ability to engage your reader in the protagonist and his or her journey. There are tell-tale signs that a writer is a novice who has not yet mastered his or her craft and lacks the skills that Hollywood decision-makers seek.

The following are tips on how to avoid certain "red flags" so that you can become a better writer, increase your chances of selling your script and establish yourself as a pro!

DO stay within standard script length -- 108 - 114 pages ideally. A 122 page screenplay is long but still acceptable.

DON'T turn in a script that is 139 pages! Unless it's an epic such as "Dancing with Wolves", "Braveheart" or "Seven Samurai" and you are one of Hollywood's A-listers at the top of your game, scripts should never be this long. Turning in a script that is too long is a tell-tale sign you're a novice and haven't had the discipline to edit your work.

DO write a central character with a strong point of view who will take us on a journey, seeing the world and experiences through his or her eyes, emotions, actions and reactions.

DON'T write character monologues that take up a whole page. In fact, avoid writing a character monologue that takes up even half of a page. This is a tell-tale sign you're an amateur. If you feel absolutely compelled to write a long monologue, break it up with visuals such as image motifs that correlate to what is being said and/or other character's reactions.

DO write compelling, vivid, emotionally engaging, endearing, flawed characters when you first introduce them. If you don't care enough about your characters to create an interesting portrait of who they are, chances are the person reading your screenplay (an agent, actor, producer, director, executive) won't care about them either. Introducing a character and only including their age and the color of their hair is another tell-tale sign of an amateur.

DO take pride in your work, making sure there are no typos or grammatical errors and that your script is formatted properly. How you present your work is a reflection of you. Always present yourself as a professional and be meticulous. If you are sloppy and do not care about your work's professional appearance, neither will your reader and it will wind up in the trash.

DON'T write endless camera angles in your descriptive passages or stage directions with respect to dialogue and the manner in which your character should read a specific line. Let the director decide how to shoot a scene and let the actor decide how to read the line.

DON'T write expositional dialogue where your characters state exactly what they are thinking and feeling. Human beings in real-life do not speak this way. Often they are afraid to express how they really feel. Sometimes they might be passive- aggressive or say the opposite of how they're feeling. Writing expositional dialogue or dialogue that is "on the nose" limits characters' dimensionality and depth.

DO write subtext where characters do not state exactly how they feel. Examples of great subtext can be found in Harold Pinter's "Old Times" and the Humphrey Bogart, Lauren Bacall classic "To Have and Have Not".

DO use image motifs, awkward moments and even silent moments to convey mood and emotions. For example, a lead character sitting in the middle of an empty square surrounded by tall buildings tells us about the character's isolation, without the character having to actually state that he or she is lonely. A picture paints a thousand words. Movies are visual mediums. Don't be afraid to use pictures and images to help tell your story.

DON'T write MASSIVE paragraphs of description or action -- try to keep it 3 to 4 lines max! (This last "Don't" comes courtesy of my good friend, Joseph Frio, founder of ScreenplayFest.

Her credits include Mad Money with Diane Keaton, Queen Latifah, and Katie Holmes; Making Mr. Right with Dean Cain for Lifetime; and the award-winning miniseries Sally Hemings: An American Scandal for CBS. Currently, she has projects set up with CAA, Sierra Affinity, Out of the Blue, and Anonymous Content (True Detective; manages Ryan Gosling, Steven Soderbergh, and Emma Stone).

She also founded L.A. FOR HIRE, a boutique consulting company for international screenwriters, filmmakers, and production companies seeking development expertise and Hollywood connections to sell their projects. She is responsible for securing high six-figure deals for clients and getting their projects made.

Creative Screenwriting Magazine ranks her as one of the film industry's “Best Script Consultants.”