5 Types of Loglines That Don't Work 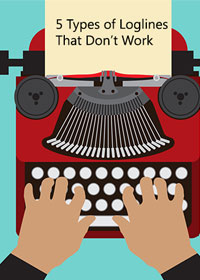 You’re a producer who just got set up with your brand spanking new InkTip account, and you’re ready to get started. The question is what do you do first?

Well, if you’re a producer, that’s a trick question because you’re probably not reading this article. Because pretty much everything you do—if you’re going to succeed as a producer—revolves around saving money. And time is money.

That’s why, if you’re a producer, you’re probably already logged in and reading loglines. That’s also why, if you’re a producer, you’re not reading every script you see but rather using loglines to select and set aside a stack of scripts to read later. Savvy writers know you aren’t going to read a script if the logline isn’t so much as how to even and there from a place in time where people and stuff. By which I mean to say savvy writers know you’re not going to read the script if you don’t understand the logline. That’s why savvy writers are always tweaking and polishing and editing and rewriting their loglines.

So this article is for savvy writers.

1. Too Much or Too Little

If I’ve said it once then I’ve shortchanged you because I should have said it ten thousand times, filmed it, posted it on YouTube, and sent you the link: brevity matters more than anything else, because it’s widely assumed that a lack of brevity is a sign of a lack of experience in other areas. But there is such a thing as too much brevity; as a rule of thumb, if there’s something in your logline that doesn’t convey the kernel of the idea, take it out. But don’t take out the things that hold that kernel of an idea together, like pronouns and punctuation.

Here’s an example of too much:

Officer Patrick O’Shaughnessy Murphy, formerly with the NYPD Special Victims Unit but since demoted to Traffic Division thanks to his bad habit of carrying out Extrajudicial Justice according to his own set of Principles which his co-workers refer to as Murphy’s Law, learns that his daughter has fallen prey to a sex trafficker named Vladimir Malik, a prolific rapist and amazing poker player (Murphy also plays poker) who is only on the streets today because he got off on a technicality when Murphy interrogated him in a manner which legal scholars and the judge saw as being a violation of his Fourth Amendment Rights.

There’s a lot going on there and very little of it is good. There might be a kernel of a marketable story, but it’s the writer’s job to present that kernel without making the producer sift through a ton of crap to find it.

On the other hand, there are also instances where writers cut out so much that the logline loses all sense of story; here’s an example of too little:

Man goes on mission to save daughter. Murphy’s law is enforced.

If you hadn’t read the previous version of the logline, would you even know what this second one was about?

A lesser crime in writing, but one which makes up for its rarity by being extra kooky, is when writers put made up names and places in their loglines.

You know how you spent an entire week or more polishing the first five pages of your epic sci-fi space opera to make sure that the characters’ names and places were all set up perfectly in such a way that the reader picked them up one-at-a-time, always within the context of the story, and never so fast as to lose track of the action? Well, you didn’t do that with the logline, because you just can’t do that with a logline. So while I’ve said before that proper nouns almost never belong in a logline, you can lose the “almost” if the proper noun isn’t a word in the dictionary or a name in the baby dictionary or a place on a map.

Here’s an example of a nonsensicalitacious logline:

An unwitting son of a Sith Lord braves Tusken Raiders on Banthas and Jawas in Sandcrawlers to bring back his Protocol droid, only to run into a hermetic Jedi master who has more midichlorians in his blood than everyone else on Tatooine combined.

If someone had read that prior to 1979, do you think they would have requested the script?

Six strangers wake up in a basement with nothing but the clothes on their backs, a hammer on the floor, and a note taped to the wall informing them that only one will get out alive. As the bodies pile up, they realize that their tormenter has a reason for tormenting them.

What does the second sentence accomplish? We already knew bodies were going to pile up, but we didn’t know why, and we still don’t.

4. Unnecessary Details with a Side of Fries

If you’ve ever pitched a novel to a literary agent, you know they want certain details about a story before they consider the gist of the story itself. So you’ve probably written query letters with details like the type of story (fiction or non), genre, word count, and comps. And you’ve probably included those details because you learned through hard trial and error that some agents won’t request a manuscript without them.

But the process in publishing evolved a bit differently than the process in filmmaking, and InkTip was developed with that second process in mind. Which means producers, who often say “I should know the genre from the logline without having to be told what it is,” can search by genre, number of locations, and oodles of other things. Which makes life a helluva lot easier for both the writer and the reader.

A little girl who can’t stand the sound of people chewing overcomes her misophonia just in time for Christmas – with the help of her therapy dog, Chewie.

A little girl who can’t stand the sound of people chewing overcomes her misophonia just in time for Christmas – with the help of her therapy dog, Chewie.

Let’s get straight to the example here:

Quarter Finalist: The You’ve Never Heard of This One Contest

Quarter Finalist: The Here’s Another One You’ve Never Heard of Fest

LOGLINE: When an ordinary strain of eczema mutates into a zombie infection, a neurologist and his dermatologist soon-to-be ex-wife must team up to find the cure.

There’s a lot to unpack here but let’s start with the obvious question: did all those accolades make that logline look any better to you than it would have looked without them?

Which is not to say one shouldn’t mention accolades in a logline; writers should just tell the story first and then use accolades in a way that helps producers who are teetering on the brink between yes and no say yes and continue considering the pitch. Here’s what that logline should look like.

When an ordinary strain of eczema mutates into a zombie infection, a neurologist and his dermatologist soon-to-be ex-wife must team up to find the cure.

Winner of the “East Buffalo Screamers and Dreamers” contest and finalist in many others; see synopsis for details.

So if the goal in writing a logline is to make it short and sweet, how does one go about doing that? Well, we’ve written a few articles for you on that subject, and there are tons of books, sites and consultants that cover that topic as well. So normally I’d say read a lot and practice some more, but another thing you might want to try is opening a twitter account just for the sake of practicing writing loglines and try tweeting them. Tweet-length loglines tend to get more viewings than longer, paragraph-like ones, and who knows? You might even connect with a producer that way. And you know which one I’m talking about, right?

I’m talking about the one who isn’t reading this article.

Jared Wynn has conducted thousands of interviews with producers, agents and managers, and he knows a lot about how to successfully market a screenplay.