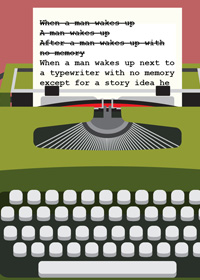 A producer called me recently to rave about a script he'd just optioned. It was a real genre-buster, it had the most unique and amazing hook, all the major roles had major star attraction, the characters were likeable, the dialogue was textured and nuanced, the pacing was a great ride, the thrills kept coming... But he almost missed out on reading it because the logline was awful.

So I asked him to show me the logline, which he was happy to do. And I'll say this, calling it awful might've been a bit hyperbolic on his part, but it wasn't really a logline; it didn't reveal anything about the characters or the plot or the premise or the nuanced dialogue or even the fact that it was a thriller. Personally, having worked in development, I can say for certain that I wouldn't have requested the script.

If this is your agent, congratulations, you're all set.

For the rest of us, let's remember that producers are looking for two things in a logline: story elements that meet their specific needs, and good writing. There's nothing we can do about specific needs; if a producer is looking for a family-friendly Christmas romcom, chances are he won't read anything else. But if we happen to have such a script, then it's our job to make sure the logline conveys those story elements AND good writing.

So, where do we begin?

First: go back and re-read my article on The Hook. Figure out what your hook is before you even begin shaping it into a logline.

Next: realize that loglines, like the scripts you write, have structure. And ultimately, even though it's the hook that reels them in, good structure really does make it easier to convey that hook. Especially to someone who reads a lot of loglines.

I can't stress this enough: people who read a lot of loglines eventually become accustomed to reading loglines that follow a certain format or industry standard. So much so that, if your logline doesn't adhere to this standard, it can negatively affect their impression of your script and result in an instant, impulsive "pass" decision.

I'm in a unique position here at InkTip where I'm able to look at and track viewings on loglines, and I'm even able to test sample loglines with different structures - and I've noticed in recent years that two particular types of loglines work better than others. What's especially important to note is that one of them works better with character-driven scripts, while the other works better with story-driven scripts.

Now let's ask ourselves: is my script character-driven or story-driven? Here's a rule of thumb to help you figure this out: if your protagonist does something that causes the story to unfold (like a family embarking on a road trip to enter the "Little Miss Sunshine" contest), it's probably a character-driven script. On the other hand, if something happens to your protagonist and he or she must respond (like a CIA agent's daughter getting kidnapped by sex traffickers), it's probably a story-driven script.

So if your script is character-driven, start with a description of your character and then go into the shortcoming that turns the plot into an obstacle. In fact this is pretty much the whole character logline formula in a nutshell: character vs. plot.

To get you started, character-driven loglines usually have an article at the beginning of the logline, as in "The best man at the wedding..." or "A race car driver with nothing to lose..."

Here are a couple examples of Character-Driven loglines:

"A confident but average-looking little girl drags her weird family across the country on a road trip to enter a beauty pageant."

"A left-handed illegal alien must win a thumb wrestling tournament to impress the woman of his dreams - who happens to be a xenophobic border patrol agent."

On the other hand, if your script is story-driven, start with the inciting incident and then go into the character. In fact this is pretty much the whole story-driven logline formula in a nutshell: plot vs. character.

And to get you started here, story-driven loglines usually have a time reference at the beginning of the logline, as in "When a bomb is buried under the pitcher's mound..." or "After losing his entire stock portfolio in the crash of ‘08..."

Here are a couple examples of Story-Driven loglines:

"After being trapped in a building by hostage-taking terrorists on Christmas Eve, an unarmed cop must outrun, outwit, and hunt the bad guys down one-by-one."

"When his estranged daughter is kidnapped by sex traffickers in Europe, an ex-CIA agent must use all his badass skills to track down the bad guys and save her."

Notice that both of these logline structures convey both character and plot; those are the two elements that need to be in every logline, period. If you have a logline that doesn't include character and plot, chances are it isn't an effective logline.

Regardless of which structure you use, here are some dos and don'ts to observe when writing a logline:

2.     Don't use a tagline, like "They came for the adventure. They stayed for lunch." Taglines work on movie posters because of the visual reference, but on a piece of paper or a computer monitor, no one would be able to tell whether the tagline above is about professional pizza tasters on a road trip or spelunkers in a cave full of vampires.

3.     Don't use a premise question, like "what would you do if aliens landed in your backyard?" Premise questions tell very little about the story and nothing at all about the characters, and even if a writer does manage to work in character and story, a lot of producers will pass on the script just because they perceive question marks in loglines as a sign that the writer lacks skill.

But that doesn't mean you shouldn't include the premise in your logline! Just plug it into one of the formulas above, as in: "When aliens land in the backyard of a jaded but handsome Hollywood producer..." This works as the start of a logline because it turns premise into plot-vs.-character, and that (along with a little bit of butt-kissing) is what producers like to see.

So, with that in mind,

2.     Do keep it short - one or two sentences is the general rule, but an even better rule is just to get it as short as you can possibly get it.

3.     Do write multiple loglines for the same story.

4.     Do run them by friends and family for feedback, but more importantly, run them by people in the industry for feedback. (This is also a great way to sneak in a pitch if you already know the producer: "which of these two loglines do you think works better?")

5.     And finally, do switch up your loglines on InkTip every six weeks or so to test them.

And if you find a structure works better than all the others, let me know!

Jared Wynn has conducted thousands of interviews with producers, agents and managers, and has amassed in-depth, critical information on how to successfully market a screenplay.