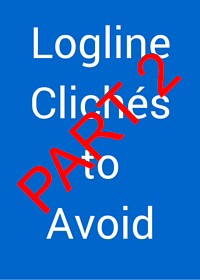 Writing loglines reveals not only how well we know our scripts but how well we can lure readers with a sentence or two.

To do this, they rely on pitches that read well. This means that the premise must be clear, concise and original. This means the fewer unnecessary words that convolute the story, tone, etc., the better.


A good way for writers to do this is by avoiding clichés that are either not needed or harmful.

Below are some examples to avoid (you can read part 1 here).

Example:
This is a story about…


2. Beginning with the genre:

Example:
An action-thriller set in the woods, this is about a …

Example:
Cubic Zirconia Man is about a superhero who begrudgingly defends diamonds from…

This is better:
When thieves break into a cabin to steal a large diamond, they confront an insecure anti-superhero made of cubic zirconia who wants to prove to them and all diamond thieves how strong the “fake diamond” metal is.


Also, it’s better to not include your title anywhere in your logline as a cute reference. Let’s say that your script is called Enraged.

Example:
A rabbit hunter realizes the rabbits have turned the tables and are now ENRAGED, so enraged that they are coming after him.

This is better:
A rabbit hunter faces off against rabid rabbits who not only want to kill him, but skin him to make human coats.

This is particularly useless especially if the answer is obvious. If you want to highlight a dilemma between two choices, make sure that the choices are not generic and are specific in why the consequences of the choices matter.

Example:
After a cop shoots Swamp Thing, a creature that terrorizes a town, it dies…or did it?

This is better:
An emotionally-dead cop shoots a lonely swamp creature, not realizing that bullets only make it stronger and angrier. Soon, Swamp Thing will flood an entire town, forcing the cop to choose between saving the town using kindness or gettin the hell outta town.

Example 2:
In a science lab, a chemist produces a cure for all cancer and plans on revealing it to the world…or will she?

It’s better to either tell us why this is even a choice or simply tell us what the consequences are.

This is better:
After a chemist discovers a cure-all for cancer, she must race to reveal it to the world before a rogue agency steals it.

Example 3:
Boy meets girl and asks her out on a date…or will he?

Either he spends most of the film deliberating on it, and in that case it should be revealed why, or, simply say he asked her out and what the conflict is.

This is better:
An ambitious but extremely virtuous chef asks out a frequent customer whom he doesn’t know is also a Michelin star judge, triggering a new romance while corrupting his ethics.

Example 1:
An ordinary dad buys a house for his family. But things are not what they seem…

Example 2:
Things are not what they seem at Riverbend High, a school of well-dressed, well-mannered kids who hide a deadly secret.


This is better:
After an ordinary dad moves his family into a house, he becomes increasingly psychotic around them, especially around his mother-in-law who begins showing the same tendencies to lash out.

This is better:
At a seemingly ideal high school, four friends struggle to conceal their involvement in a football coach’s death from a nosy principal and his detective sister.


The key to resolving most of the above examples is to be specific instead of vague and to reduce the use of well-worn idioms and expressions.

To read more tips on writing good loglines, you can find some here, here and here.